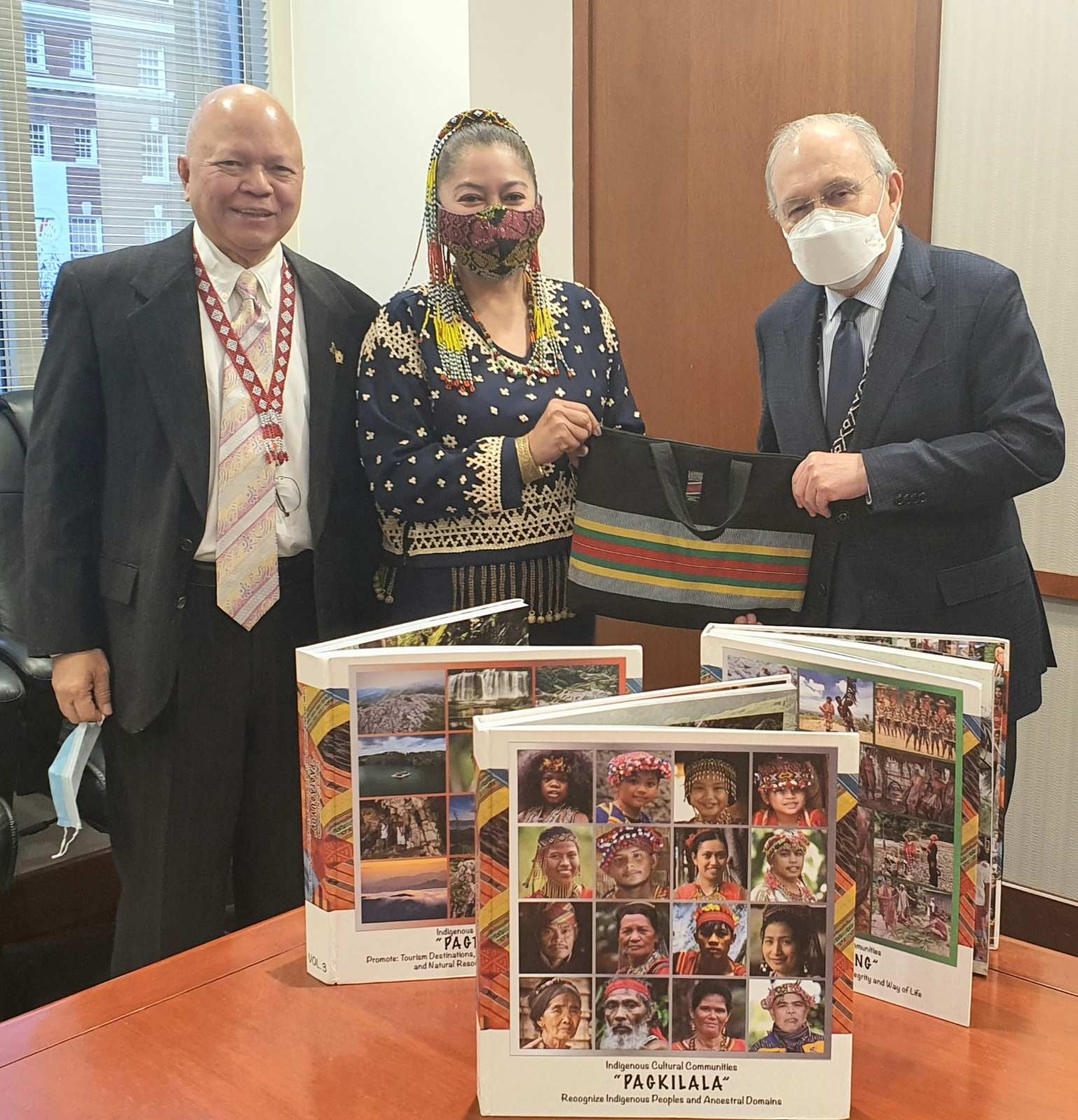 The National Commission on Indigenous Peoples (NCIP) through its representative, Commissioner for Central Mindanao, Bo-i Jennifer Pia Sibug-Las, in its thrust to promote the Indigenous Cultural Communities/Indigenous Peoples (ICCs/IPs) of the Philippines, turned over one set of Project Epanaw’s Three (3) Coffee Table Books (CTBs) to the Philippine Ambassador to the United States of America (USA), His Excellency Jose Manuel “Babe” del Gallego Romualdez last December 3, 2021 at the Embassy of the Philippines in Washington, D.C., USA located at Bataan Street corner 1600 Massachusetts Avenue, New Washington (NW), USA. 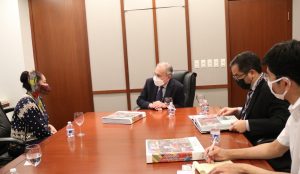 Commissioner Las, who was warmly welcomed at the conference room together with Grand Lodge of New York Jurisdiction, Samuel Tomale, proudly shared to Ambassador Romualdez, along with Deputy Chief of Mission, Jaime Ramon T. Ascalon, Jr. and Third Secretary Mark Dominic E. Lim, the purpose of her visit which was primarily to turn over the 3 CTBs. These CTBs, a labor of love of undertaking of the NCIP, were produced during the pandemic by NCIP personnel from Central, Regional, and Field Offices and the ICCs/IPs which was launched last March 14, 2021, one year after the imposition of the Enhanced Community Quarantine (ECQ) in the Philippines.

She further explained that the project was a brainchild of the NCIP Chairperson, Secretary Allen Capuyan. Project Epanaw seeks to pay tribute and memorialize the identities and rituals of the Indigenous Peoples as well as to highlight the importance of protecting their Ancestral Domains. The first CTB, “Pagkilala” (Recognize), showcases the profiles of the ICCs/IPs. The second CTB, “Paggalang” (Respect), features festivals and rituals that the ICCs/IPs practice in relation to important events such as birth and death, agricultural cycle, and the sacred and profane. While the third CTB, “Pagtaguyod” (Promote), contains tourism destinations, protected areas, critical infrastructures, and natural resources in Ancestral Domains. 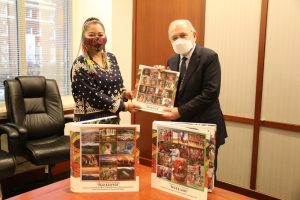 The NCIP has partnered with the Tourism Promotions Board (TPB) of the Department of Tourism (DOT) for the research and publication of Project Epanaw which had already been distributed widely all over the Philippines particularly to NCIP employees, Indigenous Mandatory Representatives (IPMRs), National Government Agencies (NGAs), and other stakeholders.

Ambassador Romualdez, during the meeting, expressed his gratitude to the NCIP for receiving a set of the CTBs which will surely be put on view at the Embassy and further hopes for more engagement and partnership in assisting the consulate in its thrust to promote awareness on Philippine culture to the world. He also mentioned that he has already partnered with the Indigenous Peoples in the Philippines through the Fernbank Museum’s “Reflection of Culture” exhibition in partnership with the Filipino Community in Atlanta, Georgia, USA through Galing Foundation, Inc. (GFI).

Commissioner Las, prior to being a Commissioner of the NCIP in her private capacity, loaned their group’s Matrimonial traditional attire to the museum for three (3) years starting 2019-2022. The Ambassador also supported the project “Of Threads and Beads,” of said community during the 2020 Independence Day virtual celebration last year. He likewise congratulated the NCIP, Secretary Allen Capuyan, and all those responsible behind the great work which would be very useful to the Embassy and the other consulates in the United States and will surely help the 4.5 million American Filipinos understand the Indigenous Peoples, their culture, and their Ancestral Domains.

Both committed to expand their support for each other’s mandates to promote the Indigenous Peoples of the Philippines, being the first peoples of the country, worthy of recognition as the foundation of Philippine culture. Several projects geared towards promoting the Indigenous Peoples of the country were discussed and possible partnerships with other agencies like the DOT and the National Commission for Culture and the Arts (NCCA) be strengthened to carry out policies on enhancement of positive image of Philippine ICCs/IPs to the international community.

The NCIP is the primary agency of the Philippine government mandated to formulate and implement policies, plans, and programs to recognize, respect, promote, and protect the rights and well-being of the ICCs/IPs. It aims to empower and capacitate the Indigenous Peoples by introducing them and their thirty-six (36) Specific Rights under the four (4) Bundles of Rights to the international community through the Project Epanaw’s 3 CTBs.