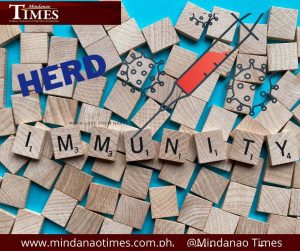 A TOTAL of 1,136,577 million individuals have already been vaccinated, translating to 87% of the target for the first dose as of Dec. 1. Meanwhile, the city also administered the second dose for the vaccine to 967,053 people.

The city health official said Davao City does not only target 70 percent of the population to achieve herd immunity goal.

“We are aiming for 100 percent. As chairman of the COVID-19 Task Force in Davao, the mayor and the rest of the task force members and our City Health Office, ang goal gyud nato (our goal), headed by our vaccination cluster, is 100 percent,” she said.

As of 2020, Davao City has a population of 1,825,450, according to the National Economic and Development Authority (Neda) in the region.

Davao City, according to her, will continue to participate in part two of the National Vaccination Day slated on Dec. 15 and 16. The vaccine cluster of the Davao COVID-19 Task Force is preparing for the second edition of the Bakunahan with the CHO and Department of Health XI.

The house-to-house and barangay mobile vaccinations will continue. Dialogues with tribal leaders in far-flung barangays will also continue to address the vaccine hesitancy among indigenous people (IP) communities.

All vaccination hubs in the city now cater to walk-ins and for all priority groups. But the booster shots, in the meantime, are intended for those under the A1 priority group or the health care workers.