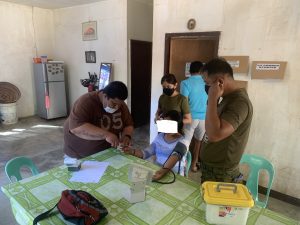 A-FIVE-MONTH pregnant medical staff of the New People’s Army (NPA), surrendered to the soldiers of the 66th Infantry Battalion following a clash in Lupon, Davao Oriental on Nov. 7.

According to the report, an armed clash initially ensued, which led the rest of the NPA members to scamper in various directions abandoning alias Domai who eventually surrendered as she was unable to escape during the firefight at Sitio Yauri, Barangay Calapagan in Lupon.

After which, she was immediately given first aid by the troops and subsequently moved to Mati City for further medical evaluation.

The medical staff of the Davao Oriental Provincial Medical Center found out that alias Domai pregnant.

Initial questioning revealed that she was always contemplating to surrender due to hardships from unrelenting government troops’ operations causing them physical exhaustion as they can no longer hide among the masses who previously supported them.

She also admitted that the loss of their mass base’s support led to the growing discontent among the guerilla front’s ranks, which is manifested by the increased number of the rebels going back to the folds of the law. 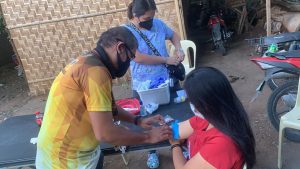 She is now under the custody of the 66IB who are now processing her requirements to avail of the government’s Enhanced Comprehensive Local Integration Program (ECLIP).

With this, the commander of the 701st Brigade, Col. Oliver C. Maquiling stressed that the surrender of the top leader of WGF18 will be a major setback for the armed group.

Alias Janggo was recruited sometime on January 2012. However, according to him, because of the hardships, his longingness to his family, health problems and of his observations that majority of his comrades is already planning to surrender, he opted to leave the NPA on Dec. 26, 2020.

He was convinced that there is no hope in the armed struggle and that their long-lost ideology is not worth fighting for that made him able to reveal the arms cache kept by his former unit.

It can be recalled that in 701st area of responsibility alone, two Guerilla Fronts were dismantled this year. These were the Guerilla Front North and Guerilla Front South declared as “dismantled” by the Armed Forces of the Philippines by the second quarter and first quarter of this year, respectively.

In addition, another factor for this huge upset is the continuous implementation of the Barangay Development Program (BDP) in 10ID AOR wherein 852 projects in 307 barangays were programmed for BDP for 2021 and another 208 barangays programmed for Calendar Year 2022 wherein majority of these barangays issued their statement of support for the said endeavor.

Maj. Gen. Ernesto C. Torres Jr, commander of the 10th Infantry Division welcomed the new development, lauding the troops and attributing the success to the NTF-ELCAC, local officials and the people.

Torres said, “This is a victory of the people, that is to say, the Whole of Nation (WON) being undertaken by no other than the NTF-ELCAC. Ka Domai mirrors the present collective general state of the confronted communist terrorist threat organizations within the 10ID area of responsibility where all are on the verge of defeat, their members ready to give up at any moment.”

“I therefore renew the call to my colleagues in government and people in this region to press on and give the CTG the needed pressure that would lead to their complete surrender. We will remain at the frontline trenches until lasting peace prevails uncontested,” he added.