Davao info officer not yet off the hook after drug raid 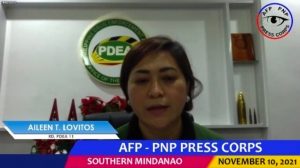 THE PHILIPPINE Drug Enforcement Agency (PDEA) XI said that everyone who attended the exclusive party where party drugs were seized is subject to an internal investigation, including the axed information officer of Davao City.

Speaking in yesterday’s AFP-PNP press corps Southern Mindanao virtual presser, PDEA XI chief Aileen Lovitos, said they have deepened their investigation on what really transpired and shed light on the speculations that Jefry Tupas and her boyfriend were allowed to leave, as alleged by some of the arrested individuals

“We will further look into what had happened during the conduct of the operation,” Lovitos said. “Yes (Jefry) is part of the ongoing investigation that we are conducting already.”

When asked if Tupas is included in the drug watchlist of PDEA, she replied, “I cannot make any comments on that. The names can only be released during the conduct of the operation.”

In a text message released to the press, Tupas confessed to being present at the party but insisted that she left with her boyfriend and another friend right after dinner.

However, Mayor Sara Duterte issued a statement that Ms. Tupas was terminated as the city information officer right at the moment when she tendered her resignation.

Lovitos said that she only relied on the information from the team on the ground, but as far as she was concerned, they arrested all the guests at the exclusive event. She said that some of them were subjects of surveillance for their involvement in illicit drugs.

“I will take it as it is whatever is the statement of the mayor (Duterte). And Ms. Tupas also has a statement about the incident,” she added.

In an interview conducted by Newsline, the arrested suspects insisted that Tupas was among those caught during the raid. They claimed that she and her boyfriend were released on the intercession of an official. But she denied that they let anyone walk free.

“There was an ongoing party and there were many beachgoers and partygoers that time. As I’ve said earlier. we have all our targets in the operation,” she added.

Profiling of the suspects

She reiterated that those arrested were young professionals and entrepreneurs.

“I was not the regional director that time but the operatives were able to confiscate more or less 300 tablets of ecstasy,” she said, adding that this time, they confiscated 700 tablets of MDMA.

Even back in 2009, a poseur buyer was able to purchase three tablets of ecstasy, so “party drugs continued to enter and proliferate in our area.”

Lovitos also said that most of those arrested tested positive for the use of illegal drugs. “With the arrest of these personalities, we are hoping that we have disrupted these illegal activities,” she said.

For now, the suspects are under the custody of the National Bureau of Investigation -Southeastern Mindanao Regional Office until the commitment order will be released by the prosecution office.

In addition, the PDEA XI chief said they are also investigating the resort to determine if they knew of the illegal activity within their premises. If their culpability is established, they shall face a case for violation of Sec. 6 of RA 9165.