First, AGR702 was monitored by the Littoral Monitoring Station (LMS) Surigao performing unusual voyage patterns about five nautical miles off the coast of Punta Bilar and was subsequently reported to the Eastern Mindanao Command (EMC) and Joint Task Force Seahawk.

Following the coordination with the Coast Guard District North Eastern Mindanao, a radio challenge was initiated, to which the AGR702 failed to respond, resulting in the execution of a maritime interdiction operation.

JTF Seahawk deployed Philippine Navy C90 Aircraft (NV394) to verify the situation, as well as BRP Andres Bonifacio (PS17) and MRRV4401 to conduct maritime patrol and Visit, Board, Search and Seizure (VBSS) as a proactive measure. Upon inspection, it was discovered that the AGR702 was smuggling cocaine in and out of the country.

The inspection team of MRRV4401 seized the vessel and its crew, manned the ship, and transported it to the nearest port for proper disposition.

In the second scenario, the PNP Maritime Unit XIII in Surigao City reported that a number of armed men were spotted harboring a house in Punta Bilar, and were later confirmed to be violent extremists planning to disrupt the city’s peace and order.

With this information, JTF Seahawk dispatched the Sea, Air, Land (SEAL) team of Naval Special Operations Unit 7 (NAVSOU) for the execution of Special Operations (SPECOPS), eventually resulting in the neutralization of the enemies, including their leader.

However, two of their comrades escaped on a speedboat, and a hot pursuit operation ensued that escalated to a firefight between the pursuing law enforcers and the terrorists.

During the exchange of fire, one assailant from the speedboat was thrown overboard, and the PNP MG RMU XIII vessel caught fire. 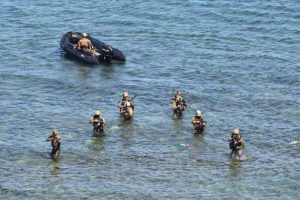 As part of the Maritime protocol, the preservation of life is always paramount. Thus, the Maritime Law Enforcement team of PNP MG RMU XIII conducted Search and Rescue, and Medical Evacuation (MEDEVAC), while the MRRV4401 of CGDNEM extinguished the fire on the stricken vessel.