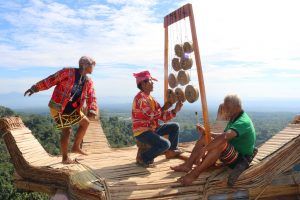 HONORING one of Davao city’s homegrown tribal groups, researchers from the University of Mindanao (UM) and their partners named a new species of ‘easter egg’ beetle after the Obu Manuvu tribe.

Dubbed Pachyrhynchus obumanuvu, the brilliantly colored beetle, with its iridescent scarlet and green-black markings has coloring reminiscent of the Obu Manuvus’s traditional garments.

Dr. Milton Medina, assistant vice president for the university’s Research and Publication Center and director for UM’s Institute for Biodiversity and Environment, and who was part of the research group who discovered the new beetle, said Pachyrhynchus obumanuvu was discovered in the remaining heavily forestedareas in Mindanao, particularly in the ancestral domain of the Obu Manuvu in the western side of 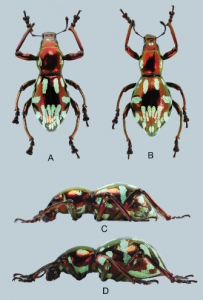 Pachyrhynchus obumanuvu was discovered in time for the National Indigenous People’s Month celebration in October.

“We wanted to honor the various indigenous communities in Davao region since they are the primary stakeholders of our mountain ecosystems and also because the specimen was collected from their ancestral lands,” added Dr. Ann Cabras, director for UM’s Coleoptera Research Center.

The Pachyrhynchus obumanuvu team of researchers is composed of UM’s Dr.Cabras and Dr. Medina, Dr. Matthew Van Dam from the California Academy of Sciences, and Mr. Joshua Donato from the EGIP Foundation. (photos from Dr. Ann Cabras)