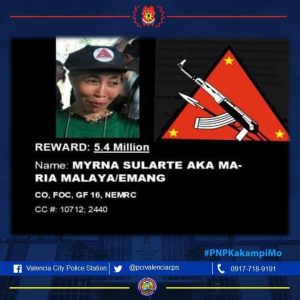 GOVERNMENT troops have a marching order to take down the wife of Jorge Madlos alias Ka Oris, following the death of one of the top leaders of the New People’s Army and National Democratic Front on Oct. 30.

Also killed in the encounter was Eighfel de la Pena alias Pika/Maui, communication staff, and medical staff of the NOC.

Brawner said Sularte is now operating the Caraga region as the top NPA leader in the region.

“That is why with the death of Jorge Madlos, I am begging Myrna Sularte to surrender because it is futile to continue this armed struggle that really has no direction at all,” he added. “That is why they are there and continue on their revolutionary movement because of the money they get.”

The division commander ordered the soldiers to continue the insurgency operations against the members of NCRMC and NERMC.

“Hindi ibig sabihin na namatay na si Ka Oris we will stop. This time, we will go after the wife of Jorge Madlos. That’s my marching order to the soldiers,” he further said.

Also, Brig. Gen. Ferdinand Barandon, the commander of 403rd Infantry Brigade, said the death of Madlos will be the start of the end of the New People’s Army and the subsequent downfall of the CPP-NPA-NDF.

Moreover, Brawner said there are still NPAs in the Caraga region with more than 300 members.

“That is why we are requesting that they surrender instead and not wait to have the same fate with their leader Ka Oris,” he added.

The military confirmed on Sunday the death of Jorge “Ka Oris” Madlos, 72, during a clash with troops from the 4th Infantry Division in the hinterlands of Impasug-ong Bukidnon on Oct. 30.

Brawner said they had three ways of ascertaining the identity of Ka Oris. For instance, they showed a photo of him to rebel returnees who immediately confirmed that it was Madlos.

Third, they are also in the process of securing the dental records of the rebel leader.

“But as of now, the one killed and the recovered body was of Ka Oris,” he further said.

The military then presented a photo of the body of Madlos while being tested for COVID-19 RT-PCR test.

Brig. Gen. Ferdinand Barandon, the commander of 403rd Infantry Brigade, said the result of the swab test will be released tonight on Oct. 31 or Nov. 1 from Camp Evangelista Hospital in the 4th Infantry Division headquarters in Cagayan de Oro City.

“So, this is proof that we have neutralized one of the top leaders of the NPA,,” Barandon added.

When asked what happened, Brig Gen. Ferdinand Barandon, the commander of 403rd Infantry brigade, said Ka Oris went to the hinterlands of Imasug-Ong Bukidnon to visit the members of the NPAs.

According to Brawner, an hour-long armed encounter occurred between the combined forces of the 8IB, 88thIB, and 2nd Second Scout Ranger Battalion and more or less 30 members of the Narional Operations Command of the NPA in Sitio Cabunan, Barangay Dumalaging in Impasug-ong around 11:30 am.

After the encounter, he said two bodies were recovered by the troops at the site. Madlos sustained gunshot wound in his body during encounter, the military added.

Also recovered were an M14 rifle, one submachine gun, and other subversive documents owned by the group.

The military said they will still wait for the release of the COVID-19 test. If negative, he will be turned over to the local police and the local government unit of Malaybalay.

For now, they are still waiting for the family of Madlos to claim the body.

The military then conveyed their sympathies and condolences to the family of Jorge Madlos and his medical staff killed during encounter.

He then called the remaining members if the NPAs to surrender and we will accept them. “If you do not surrender you will suffer the same fate as Ka Oris,” so that you will enjoy the benefits of the E-Clip,” he added.

Brawner congratulated the combined forces that launched the operations led by the 403rd Brigade, under BGen Barandon, for the neutralization of the highest leadership of the New People’s Army.

He also lauded the courage of the civilians who provided the timely information.

“Ka Oris’ reign of terror has finally ended. Unfortunately, the consequences of his atrocities led to a tragic ending. Now, justice has been served for those innocent civilians and their communities he terrorized for several decades. His death could be the final blow for the eventual collapse of the communist terrorist group here in our AOR”, MGen Branwer Jr added.

Brawner said the P7.8 million reward money will definitely go to a civilian tipster as to the whereabouts of Jorge Madlos and his companion. He added they will enroll the tipster under the witness protection program for his or her safety and security.