Alleged peddler, 6 others arrested for shabu 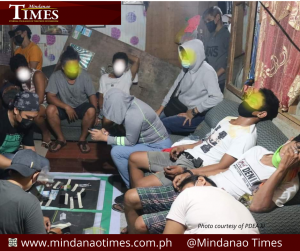 Nephi Noli Dimaandal, PDEA XI spokesperson, said the subject of the operation was Ishmael Sanchez, 39, married and a resident of the place.

Sanchez was arrested with about P10,000 worth of shabu while selling it to an agent who acted as buyer. The others, the report added, were his visitors and that thet were arrested when someone reported their activity to the agency.

The report said also recovered during the operation were six sachets of different sizes believed to be containing shabu with a combined value of P285,000, a handgun and other things related to the use of the illegal substance.