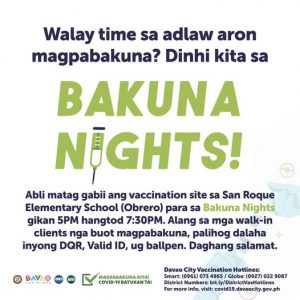 THE city government is hoping that more residents will get vaccinated against COVID-19 as it is expanding the handing out of incentives and adding more sites for the rollout of the program.

Dr. Michelle Schlosser, COVID-19 Task Force spokesperson, said incentives will be provided every week in sites that are venues for vaccination at night, instead of only making these available at the San Roque Elementary School, the first venue for the vaccination at night.

“We are hoping nga tanan Bakuna Nights, naay ing-ana na activity (handing out of incentives),” she said as the initiative was launched on October 1 where gift certificates were raffled off to those who got inoculated

She added that there is a plan to hold raffles on a daily basis, although she said this has yet to be finalized.

She added that those who have yet to register for vaccination can just visit the sites, including those sites for Bakuna Nights.

Last week, she added, about half a million doses arrived.

She said those who want to get vaccinated must only register onsite and must bring their valid identification documents, ballpen and Safe Davao QR code.

She added that the list of vaccination hubs, which can be found in the official Facebook page of the city government (facebook.com/davaocitygov.) is updated every Monday.

The city government has also expanded the holding of vaccination at night as NCCC Mall in Buhangin held its first rollout on October 8, while both SM Lanang Premier and SM City Davao will start on October 20. The initial site was San Roque Elementary School in Barrio Obrero.

In a related development, the city council initiated vaccination rollout has so far inoculated about 87,874 as of October 14 with 60,616 getting their first jabs while the remainder having fully vaccinated.