Sara wants to finish  her term as mayor

By Carmelito Francisco on October 8, 2021 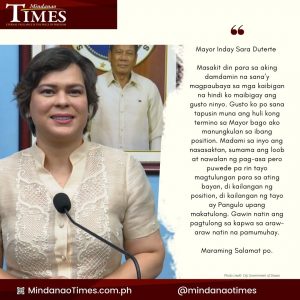 JUST two days until the deadline in the filing of candidacy for the 2022 elections, Mayor Sara Duterte has closed the door on the call for her to run for President.

In a post on her official Facebook page, the mayor said it pains her to not accede to the calls of her friends for her to run for the highest position.

She said she understood that many are in pain, angry and are losing hope but that she and those supporting her can still join together for the country, “without a position, need not need us to become President just to help. “

Despite the statement from the mayor, supporters have continued to hope that she will still change her mind.

Although he said the mayor spoke from the heart and that she was always thankful for the expression of support, Peter T. Lavina, co-convenor of the Sara All Philippines 2022, said that until the deadline of the filing of candidacy at 5pm on October 8, his group will still cling to the hope that she finally heeds their call for run for President.

“The poll body (Commission on Elections set that deadline for a purpose. I will wait,” he said in a private message.

The mayor came out with the statement just hours after former senator Ferdinand Marcos Jr. filed his candidacy for president, dousing cold water on the rumor that he would run as her vice president.

On Saturday, the mayor also filed her candidacy for reelection just an hour after her father President Rodrigo Duterte decided to abandon his bid for vice president.

When the party of her father announced it was nominating him as its vice presidential candidate, the mayor announced that she would not run for President as there was a family agreement that only one member would seek a national post.