For reelection | All Duterte children seeking another term 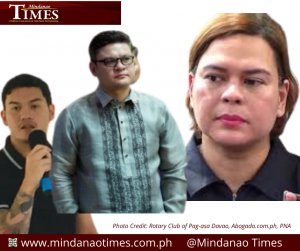 THE three Duterte children are vying for reelection as Vice Mayor Sebastian Duterte filed both his and Paolo’s certificates of candidacy on Sunday.

Sebastian, the youngest of the three, is seeking reelection like his older siblings.

The young Duterte said that as far as his reelection is concerned, he wants “to see if the people will still want me to be their Vice Mayor.

It was the mayor, Sara, who was the first to file her certificate of candidacy for reelection on Saturday just an hour after their father, President Rodrigo Duterte, announced that he was retiring from politics.

Despite her seeking reelection, supporters of the mayor are still hoping that she will change her mind and join the presidential race.

Among those hoping that she accedes to the call is Peter Tiu Lavina, co-convenor of Sara All Philippines 2022, who told TIMES his group “is still waiting (for the mayor to change her mind).”

“We are not losing hope. We were buoyed by the fact that President Rodrigo Duterte did not pursue plans to run for Vice President thereby paving the way for just one Duterte to run for national office,” Lavina said in a statement.

He pointed out that there is still ample time for the mayor to change her mind as the filing of the certificates of candidates is still until October 8. “We look at this small window of opportunity for our big dreams for the continuity of reforms and good governance for our country.”

The vice mayor said he is supporting his sister if she decides to just serve the city.

Lavina, who was also among the leaders of the campaign of the President when he ran for the position in the 2016 race, said the mayor can withdraw her certificate of candidacy and file a new one for the highest post.

Unlike her father who substituted a colleague in his political party, the mayor needs to file a new certificate of candidacy, this time for the highest position in the elections, within the prescribed period because she is not a member of a national party.

Although he did not make a comment when sought on the mayor’s recent action, former Davao del Norte governor Anthony del Rosario, spokesperson of the mayor’s regional party Hugpong ng Pagbabago, said she might run as an independent if she decides to.

The mayor expressed her unavailability as candidate for President after the party of her father nominated him as its vice presidential candidate.

However, on Saturday he announced his retirement for politics while accompanying his longtime assistant, Senator Christopher Lawrence Go, who filed his candidacy for vice president.

During an interview, the President said Go will become the running mate of his daughter, although the latter did not comment on the issue.