NORMA “Nomi” Monfort is definitely the undisputed Bat Lady of the country.  She is the proprietress of the Monfort Bat Cave in the Garden City of Samal which houses the world’s largest known population of Geoffroy’s Rousette fruit bats (Rousettus Amplexicaudatus).  This feisty Bat Lady, who is known for her flair for speaking her mind, is passionate in promoting bat conservation in the Philippines.  As such, Nomi Monfort established the Monfort Bat Cave & Conservation Foundation, Inc.  Oh yes, this Bat Lady is determined to protect her bat cave just as Batman is out to protect his Gotham City.  And truly, this Bat Lady is mighty proud and committed in taking care of her “Angels of the Night.”  Nomi Monfort has since become an outstanding symbol of hope of Rousette fruit bats.

“My fruit bats feed on fruit and nectar.  Their valuable role as pollinators and seed dispersers is essential in sustaining the country’s forests and this includes such important commercial fruit as durian. According to a research study, each bat consumes one to three times its body weight nightly in fruit and nectar.  The Monfort Cave’s bat colony could consume 550 tons of nectar from durian and other trees pollinating an incredible number of flowers,” lectured the Bat Lady as she added, “It is sad that all over the world, cave-dwelling bats are in alarming decline due to human disturbance and the destruction of their cave dwellings.  Bats are also killed for food.  That is why there is an important need to protect the bats to maintain our forests and human economies.”

It was only last September when the Bat Lady made another impassioned call plea for the bamboo industry to play a significant role in eradicating poverty in the region.  “This can only be achieved if poor families organize themselves in planting bamboos in their communities.  The country is home to 60 bamboo species with Bambusa as the most widespread among them.

Bamboo farming can provide income after five to seven years. Bamboo is a crucial element in the balance of oxygen and carbon dioxide in the atmosphere. In studies done, it is said that a grove of bamboo release 35% more oxygen than an equivalent stand of tree.  Indeed, planting bamboo will help reduce carbon footprint and help in our fight against global warming,” Nomi Monfort pointed out the importance of bamboo in sustaining communities, bio-diversity and the environment.  And that is not to fail to mention the bamboo’s variety of economic uses such as in handicraft and furniture, farm implements, fish pen, fish cages, musical instruments, pulp and paper, clothing fiber, and of course, in house construction. Oh yes, bamboo is known as “green gold.” 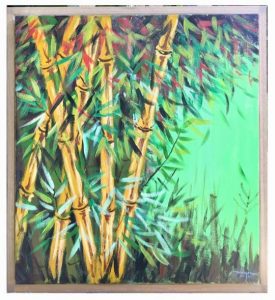 “Bamboos have helped preserve bat sanctuaries and wildlife preserves that is why growing them is important for me.  These bats pollinate plants and help protect people from disease by preying on disease-carrying insects and mosquitoes,” the Bat Lady emphasized still.

Honestly, I didn’t even know that there is a “World Bamboo Day” observed on September 18 of every year till I was informed by the Bat Lady.  It is to “raise awareness to conserve and promote the bamboo industry.”  World Bamboo Day was founded by Kamesh Salam as former president of the World Bamboo Organization in 2009 at the 8th World Bamboo Congress in Bangkok, Thailand. 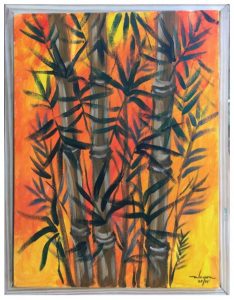 The Oriental beauty that is bamboo symbolizes longevity owing to its durability, strength, flexibility and resilience.  “Storms and strong winds may blow mightily on bamboo trees; but the bamboo tree will bend with the wind and will still stand tall like a dignified person,” so said the Davao-based artist Alex Alagon who recently had a fund raising art exhibit, “Standing Tall,” of which the proceeds would be donated to the Davao Region Bamboo Society.  The art exhibition showcased Alagon’s 20 acrylic artworks of bamboo trees which he rendered in his version of the impressionistic style.  “I am inspired with the versatility and toughness of bamboo.  The uses of bamboo span from the crib to the grave.  There is not a day that we don’t use or consume something made from bamboo.  Yes, from the bamboo shoot that we eat as nutritious food, to the scaffolding used in building construction, to fabrics and garments, and even bio-fuel,” revealed Alex Alagon.