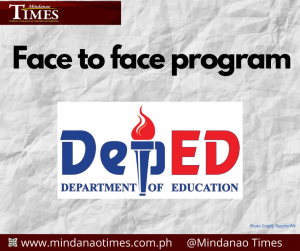 THE LOCAL government here has recommended five schools, with minimal risk of COVID-19, to be included in the pilot run of limited face-to-face classes in the country amid the pandemic.

Speaking over the radio interview on Monday at the Davao City Disaster Radio, Mayor Sara Duterte confirmed that they already communicated with the Department of Education (DepEd) in the Davao Region on the list of schools that would be included in the initial implementation of the face-to-face learning based on the city’s risk assessment.

“Mao ni siya ang gi-submit sa DepEd for pilot face-to-face for their consideration and approval if allowed. Gibutang lang nato didto, I do not know kung naa ba siya sa pilot testing guidelines sa DepEd, gibutang namo didto nga ang i-allow nga mureport nga teaching and non-teaching personnel are fully-vaccinated, two-doses vaccinated (These are the list of schools that we submitted to DepEd for pilot face-to-face classes for their consideration and approval if allowed. We indicated there… I do know if these are already part of pilot testing guidelines of DepEd, we put there that only fully-vaccinated teaching and non-teaching personnel should be allowed to report),” she said.

However, while they submitted the least risky areas for the initial rollout of in-person learning, they have not been given a go signal yet for these public schools to be already allowed by DepEd to resume.

“Again, we do not know kung approved siya or dili pero we already wrote a letter. We already sent a letter mao ni siya ng napili based sa ilang ranking sa risk assessment (We do not know yet if they are approved or not but these are the schools that were chosen based on their ranking in the risk assessment),” she said.

Aside from the teaching and non-teaching personnel, Duterte said that students, who are 18 years old and above, must be fully vaccinated as well to ensure that they are protected from the severe effect of COVID-19 should they get infected while attending the class.

The mayor further said that they also included in the letter that there should be a shifting of the schedule of classes and the classrooms should be at 50 percent of their capacity.

She also encouraged the use of the Safe DQR to monitor the activities of the people inside the school and strict adherence to the mandatory public health protocol must be observed.

School personnel and students who are manifesting symptoms of the virus should be discouraged from attending the school.

It can be recalled that President Rodrigo Duterte approved the conduct of limited face-to-face classes in areas that are deemed low risk for COVID-19 transmission.

The Philippines is the only country in Southeast Asia that has not yet pushed the reopening of schools for in-person classes due to fear of the student’s safety amidst the health crisis.