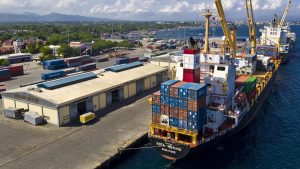 GENERAL SANTOS CITY (MindaNews) – The Philippine Ports Authority (PPA) is pushing for the revival of passenger ferry services at the Makar Port here.

Jay Daniel R. Santiago, PPA general manager, said they are continually negotiating with various shipping companies for the possible expansion of their operations in this city and other parts of the country.

He said such move was based on instructions from Department of Transportation Secretary Arthur Tugade.

“We’ve been talking with the shipping lines for the opening of more ferry routes,” he said in a press conference here on Thursday afternoon.

Santiago said among their accomplishments so far was the resumption of passenger services of 2Go Travel in Davao City.

Lawyer Cesar Dataya, head of PPA-Socsargen Port Management Office, said the domestic passenger ferry services at the Makar port initially ceased in 2008 due to the lack of clients.

He said 2Go Travel revived the route in 2018, serving Davao, Zamboanga, Iloilo, and Manila, but it only lasted for eight months.

The shipping line was forced to cease operations then due to mounting losses as a result of the lack of passengers, he said.

Dataya said the port here is being considered for a planned international sea route within the Brunei, Indonesia, Malaysia, Philippines-East Asean Growth Area but is “still on the table.”

“(Concerned) officials are still sorting out what routes to open,” he said.

In the meantime, Santiago said they are continually improving the country’s port facilities, including in this city, to make them more viable for passenger ferry services.

He said among the improvements would be the completion of the P62.8-million new Port Operations Building of the Makar port.

The new facility and the other developments offer incentives for shipping lines as it makes the port ready and more accessible.

“This mainly increases the capacity of the port to cater to passengers. We’re showing to the shipping lines that the port is ready to accept passengers,” Santiago said. (MindaNews)