By Carmelito Francisco on September 22, 2021 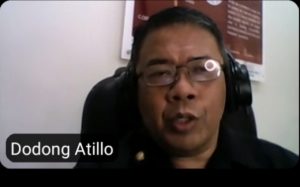 THE 18 schools in Davao Region that will hold face-to-face classes come from three areas with very low COVID-19 cases and do not include those from the city, a top official of the Department of Education (DepEd)-11.

On Tuesday, Jenielito Atillo, spokesperson of the DepEd-11, confirmed the discussion between the city government and the agency on the inclusion of the schools in the city as those schools that are included are in two provinces and another city.

Atillo said the schools in the city will be included in the next batch of the implementation of the program.

Mayor Sara Duterte on Monday said the city government and the national agency have started discussing the inclusion of the schools in the city in the pilot-testing of face-to face classes.

“We were asked to submit a list of public schools where face-to-face classes will be rolled out and this was discussed in our Covid-19 Task Force meeting. The agreement is that the 182 barangays will be ranked according to risk assessment and the last three barangays (180, 181, 182) in terms of risk assessment will be selected for the pilot face to face,” Duterte said on Monday.

The plan, the mayor said, is to include a school in each barangay as she added that there is no conclusion yet as to the inclusion of the pilot-testing of the program.

Atillo said the schools “were identified through a very meticulous process,” and that among the key factors considered was that they either did not have COVID-19 cases or that their cases were few.

Local government units (LGUs) where these schools are under have also come up with resolutions to signify their intention to the inclusion of the program.

“The third part was that these schools must also pass the health and safety assessment which is very meticulous,” he added

Parents and their children must also agree to join these classes as “no learner will be forced to attend the face-to-face class unless the parent and the child agree with it,” he said.

While the face-to-face classes will run for two months and with limited learners, the other modalities that have been implemented will continue to be implemented.

The classes, he added, will run for two months, although there is no definite date yet as to when it will start and that it will only be limited to 12 Kindergarten pupils.