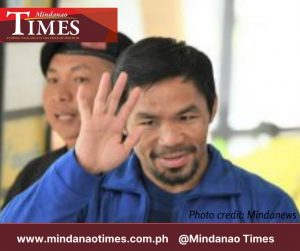 DAVAO CITY (MindaNews ) — World boxing icon and Philippine Senator Emmanuel “Manny” Pacquiao is preparing for what could be the biggest fight of his life: the Presidency of the Republic of the Philippines.

“I am a fighter and I will always be a fighter inside and outside the ring,” Pacquiao said at the 11th National Assembly of the PDP-Laban on Sunday afternoon.

Pacquiao vowed to fight corruption and warned those who are engaged in it now that “malapit na kayong magsama-sama sa kulungan (you will soon end up in jail). You’re time is up.”

The national assembly gave Pacquiao the authority to choose his running mate.

Pacquiao is the second Mindanawon senator nominated to run for President in 2022.

On September 8, a faction of the PDP-Laban under Energy Secretary Alfonso Cusi held its own national convention in Pampanga and nominated Christopher Lawrence “Bong” Go for President and President Rodrigo Duterte for Vice President.

In a statement, Go, who did not attend the assembly graced by Duterte,  reiterated he was declining the nomination.

Go was executive assistant to Mayor Rodrigo Duterte from 1998 until the latter was elected President in 2016. He took on the position of Special Assistant to the President (SAP) from 2016 until he resigned in late 2018 to run for Senator in 2019.

The National Executive Committee of the Cusi faction met via Zoom on August 4 and nominated Go to be the standard bearer and Duterte as his running mate.

On August 25, the President’s daughter, Sara, the mayor of Davao City, issued a statement asking her father and Go to go public on their intention to run as a tandem.

On August 29,  the PDP Laban founded by the late Aquilinio Pimentel Jr., the party that nominated Mayor Rodrigo Duterte to run for President in 2016 ousted Cusi as party president and President Duterte as chair, and officially elected Aquilino “Koko” Pimentel III as chair and Senator Manny Pacquaio as its president. In that same meeting, the part endorsed Pacquiao as its standard bearer.

On August 30, Go sent Cusi a letter explaining how “deeply honored” he was for their trust and confidence but he declined the endorsement to run for President, claiming he is “not interested in running for the country’s highest position.”

He said he would rather devote his time and attention “in helping the government and our people overcome this pandemic as soon as possible.”

On September 9, the day after her father accepted the nomination to run for President, Mayor Duterte announced said she will no longer run for any national position.

Last week she said she will seek reelection as mayor with her brother, Sebastian, as her running mate again. (MindaNews)