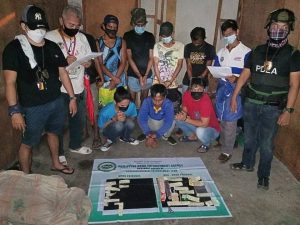 EIGHT alleged drug suspects were arrested by agents of the Philippine Drug Enforcement Agency XI together and the National Bureau of Investigation following a raid on a drug den in Purok 1-B, Barangay 76-A at 5:30 p.m. on Saturday, Sept. 11.

In a belated report, Rudy Valdez, 44, married, laborer and a resident of the place, was arrested for selling a sachet of shabu worth P1,000 to an operative who acted as poseur buyer.

Nephi Noli Dimaandal, PDEA XI spokesman said during the operation, the law enforcers saw seven drug den visitors who were caught in the act of having a shabu session.

During the search, the operatives found six sachets with suspected shabu with a total weight of more or less 20 grams with an estimated street value of P300,000. Meanwhile, assorted drug paraphernalia and the buy-bust marked money were also seized during the operation.