Three nabbed for drugs while passing through checkpoints 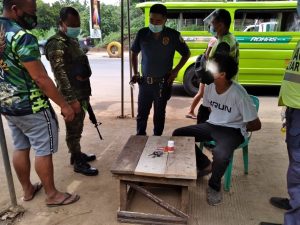 THREE individuals were arrested after law enforcers found illegal drugs from their possession while passing through three checkpoints of the Task Force Davao and the Davao City Police Office on Sept. 10.

According to the report, Jasper Amir C. Panontongan, 36, a teacher of Central Pilot School and a resident of Gonzalo Javier Street, Cotabato City.

Panontongan yielded suspected shabu with an estimated street value of P15,000, and drug paraphernalia at the Sirawan checkpoint in Toril.

The suspect was supposed to travel inside the city in his blue Toyota Avanza bearing the Plate no. ZKZ 966 when busted by the authorities.

In Lasang checkpoint, the elements of Task Group Lawin, together with Bunawan Police Station, seized nearly one gram of suspected shabu worth P3,840.

The said illegal drugs was confiscated from Chito Mc Gwynn P. Cardoza, 33, a resident of General Santos City, who was on board a black Nissan Almera with plate number GAD 4822 traveling toward the downtown area.

Jurolan was on board a white Toyota Hi-Ace Van bearing plate number KAC 2903, traveling toward Davao City when caught with an improvised glass pipe with residue of suspected shabu and other drug paraphernalia.

Col. Darren Comia, Task Force Davao commander, commended the troops for doing their duty, resulting in the arrest of the suspects. He said their arrests was a testament of the commitment of the security sectors in ensuring the safety and security of Davao City.