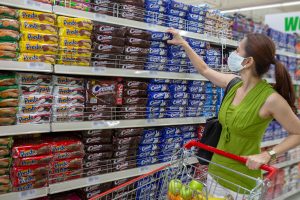 UNIVERSAL  Robina Corp. (URC) is marking its 65th year in business, still focused on its customers while taking stock of new challenges and opportunities ahead.

“As we celebrate our 65th anniversary, we are also acutely aware that millions of people have had to navigate a very difficult period shadowed by the Covid-19 pandemic.  This strengthens our commitment to marshal on, so that we can help our nation, as well as our other markets across the globe, come out of this darkness better and stronger,” said URC president and CEO Irwin Lee.

Built from a humble trading business that John Gokongwei ran on his bicycle, URC has grown into one of the largest food and beverage companies today, with market-leading shares in the Philippines in snacks, candies, chocolates, and ready-to-drink tea. It also has a strong market position in instant noodles and powdered coffee.

With his eyes always on the future, Gokongwei quickly expanded to other segments of the food business to ensure his company would flourish and later have a presence abroad.

In 1961, he and his brothers put up Consolidated Food Corp. (CFC).  Two years later, CFC introduced Blend 45, which became the best-selling coffee brand at the time.

After Blend 45, CFC diversified into candies, wafers and other food products.

URC was officially born in 1966.  It quickly dominated the snack food business, rolling out products that have become staples to this day – Chiz Curls, Chippy, Nips, Jack ‘n Jill Potato Chips, among others.  Later best-sellers were Nova, Pretzels, Piattos, Maxx and Payless.

In the 1970s, URC entered the agro-industrial and commodities business, with its foray into hog farming and flour milling, as well as sugar milling in the 1980s. These were vertically integrated with existing businesses and allowed URC to weather volatility in the commodities market.

URC expanded its beverage lineup with its C2 ready-to-drink tea in 2004, a pivot that happened after Gokongwei saw brewed tea being sold widely in China and Japan in PET bottles.  URC sold 100,000 bottles a month after it introduced C2.  Three years later, it was selling over 30 million bottles a month.

URC’s first foray abroad was via a small factory it set up in Hong Kong to produce Jack ‘n Jill Potato Chips.  The company eventually set up operations in six countries, with presence in 10 markets in the region. It’s Fun-O and Tivoli brands are currently the market leaders in Thailand’s biscuit and wafer categories, while C2 is a strong player in the ready-to-drink segment in Vietnam.

URC remains a cornerstone of the Gokongwei group of companies, with a market capitalization of over P300 billion.

“Thanks to Mr John’s constant innovation, entrepreneurial zeal and strong desire to please the

customer, URC has risen to become one of the largest branded consumer food and beverage companies in the Philippines, with a significant and growing presence in the ASEAN markets,” said Lee.

URC’s people-first approach has helped the company weather the difficult period shadowed by the Covid-19 pandemic. Over the past year, the company has pushed boundaries to ensure the well-being of employees, customers and communities.

It has kept its factories and mills up and running despite the rolling lockdowns and quarantine restrictions to make sure millions of Filipinos can stock their pantries with essential food items they need while working or sheltering at home.

Consumers can find some of Universal Robina Corporation’s (URC) products outside of the Philippines as the company exports to areas in North America, Europe, the Middle East, Africa and Indian Ocean Islands, North Asia, Oceania and the Pacific Islands