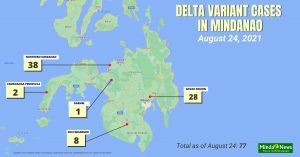 A summary of a biosurveillance report released by the Department of Health (DOH) central office on August 23 showed Mindanao posted 24 additional cases of the highly contagious variant – 11 in the Davao region (Region 11), seven more in Soccsksargen (Region 12) and six more in Northern Mindanao (Region 10).

The Department of Health (DOH) in the Davao region, however, added four more to the regional tally in its August 24 announcement, two of them Returning Overseas Filipino Workers (ROFs) and two still for verification if they are ROF or from other parts of the Philippines.

This brought the total of cases to 38 in Northern Mindanao, 28 in Davao region, and eight in Soccsksargen. Earlier, Region 9 or Zamboanga Peninsula reported two cases while the Bangsamoro Autonomous Region in Muslim Mindanao recorded one.

Nationwide, according to the biosurveillance of the Department of Health, University of the Philippines (UP)-Philippine Genome Center in Diliman, Quezon City and the UP National Institute of Health, a total of 466 Delta (B.1.617.2) variant cases were detected as of August 23, 14 of them ROFs, bringing the national total to 1,273. On August 15, the national total was 807.

The World Health Organization (WHO) on August 16 said the Delta variant is on the path to becoming the “dominant strain worldwide as surge in the highly transmissible variant increases urgency for vaccinating large numbers of vulnerable people.”

It said rising infection rates resulting in increased hospitalizations are overwhelming health systems and leaving many countries in urgent need of life-saving oxygen. It also noted that testing rates in much of the world is too low, especially low- and lower-middle-income countries – “leaving much of the world blind to how the disease is evolving and vulnerable to new variants.”

The August 23 press release of the DOH listed only the number of variant cases, the types of variants and the region where they were detected but gave no other details. It left it to the regional DOH and the local government units to provide details.

In the August 15 DOH announcement, three cases were reported under Caraga region but on August 16, Health Undersecretary and spokesperson Maria Rosario Vergeire clarified in an online press briefing that upon verification, they were ROFs (returning overseas Filipino workers) with addresses in Caraga.

She explained that they should not be classified under Caraga because they are not local cases and should therefore be classified separately, under the category ROFs. Caraga, Vergeire said, remains the lone region among the 17 regions in the country without a confirmed Delta variant case as of August 15. In the August 23 report, Caraga still had no confirmed Delta variant case.

On August 17, MindaNews clarified with Vergeire on the Caraga ROFs and the Davao de Oro ROF who was included in the regional tally by the DOH Davao office. “We do not count ROF as a local case even after they have been endorsed to the local government unit,” she said.

The regional offices, however, have been including ROFs in their statistics on the Delta variant cases. In the August 15 report, Davao region logged three more Delta cases but the DOH-Davao added a fourth – an ROF residing in Davao de Oro.

Two other ROFs from the Davao region were earlier included in the regional tally. Last week, DOH Northern Mindanao reported one of the six cases was an ROF from Tudela in Misamis Occidental.

Out of the 77 cases reported by the DOH regional offices, at least seven are ROFs who should have been listed separately but have been added to the list: five in the Davao region (3 in Davao City, one in Carmen, Davao del Norte and one in Nabunturan, Davao de Oro), one in Northern Mindanao (Tudela, Misamis Occidental) and one in Soccsksargen (General Santos City).

The first recorded Delta variant case in Mindanao is a 37-year old resident of General Santos City who worked as a seafarer and arrived in Manila on April 10 from the Sultanate of Oman.

According to the City Epidemiology and Surveillance Unit of the City Health Office in General Santos City, he tested positive on April 16 while under quarantine and was isolated until April 26. He flew to General Santos City on the 26th and onset of cough was noted. He was again quarantined in a hotel in the city but spent only a night as he was allowed to go on home quarantine. On May 3, he went through yet another RT-PCR test and on May 6, the results showed he had tested negative. On May 11, he was reintegrated to the community. On the same day the City Health Office received the results that he was a Delta variant case. (Carolyn O. Arguillas / MindaNews)