Farmers’ co-op wants to remain under contract with MEPI 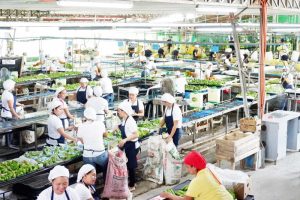 Hernando Rivero, chairman of DAMARB MPC, said the farmer-members have recognized the importance of having a lease contract with a stable company, which has become more significant these days as they face the challenges brought about by the pandemic that is affecting not only the country but the entire world.

“The other 164 ARBs who chose not to lease their lands to MEPI, like the members of Marsman Agrarian Reform Beneficiaries Cooperative (MARBCO) and later Marsman Individual Farming Agrarian Reform Beneficiaries Cooperative (MIFARBCO)opted to acquire the land through the Voluntary Offer to Sell (VOS) scheme of DAR and to become independent growers.  Right now, MARBCO and MIFARBCO ARBs are buried in debt to their investors and have been delinquent in their land amortizations with Land Bank.  Sadly, their farms are now facing serious problems with Panama Disease that are threatening their existence.  This is also the fate of many other independent growers in the banana industry”, said Rivero.

“Compare this with us at DAMARB whose members remain insulated from these problems because we have a fixed land rental scheme which MEPI recognizes come hell or high water,” he pointed out.

DAMARB MPC issued this statement in the light of developments where the Presidential Agrarian Reform Council (PARC) is expected to make a decision soon on DAMARB-MPC’s and MEPI’s motions for reconsideration on PARC’s Resolution No. 2016-30-05 dated September 12, 2016.

This resolution approved the revocation of the lease agreement of MEPI and DAMARBDEVCO (now DAMARB MPC).

While the motions for reconsideration were pending resolution, MEPI and DAMARB MPC continued to talk and amended their land lease contracts under the guidance of the Provincial Agrarian Reform Coordinating Committee (PARCCOM) in Davao del Norte. In fact, the latest amendment to the contract made in December 2019 and signed by individual ARBs saw land rentals and incentives increasing from the existing P50,000 per hectare per year to P90,000—recognized as among the highest-ever land rental plus the incentive not only in the banana-growing industry but in the entire farming sector.

In retrospect, Rivero said it was perhaps one of the best decisions made by the members of DAMARB-MPC because in the succeeding years the banana sector suffered severe setbacks brought about by Panama disease and the substantial drop of banana prices in the international markets.

According to the Philippine Statistics Authority data, total Cavendish exports in 2020 reached only 3.4 million MT, or 17 percent lower than the record-high shipment 4.1 million MT in 2019.

For the period January to June 2021, the situation was worse as total Cavendish exports dropped by 88.5% or to 1 million ton from 2 million tons.

“In our 5th Amendment to contract of lease, each of our ARB-member is entitled to receive an annual variable production incentive beginning 2019.  For the years 2019 and 2020, since MEPI achieved a production of more than 4,300 boxes, our ARBs received an additional P80,000 for two years,” Rivero added.

He also pointed out that MEPI “assumed the payment of all local taxes for our lands and for its improvements. To compare, real property taxes on the lands awarded to ARBs of other cooperatives remain delinquent because of their inability to pay the same.”

The DAMARB MPC official noted that “each member-ARB, or in his stead a member of his household, is granted employment preference, health insurance, and even mortuary benefit in case of death of the ARB. It is worthy to emphasize that these economic benefits neither cost the government nor the ARB a single centavo as the properties were donated to us, in consideration for the lease.”

MEPI donated the 799-hectare banana plantation to DAMARB-MPC in consideration of a lease-back agreement of 30years, with corresponding land rentals to be paid by MEPI.

The lease agreement was approved by then Presidential Agrarian Reform Council (PARC) which, at that time, was headed by former President Gloria Macapagal-Arroyo, on the condition that the land be subdivided and individually titled to the ARBs who could then freely choose what they want to do with their own land.

762 ARB-members of the DAMARB-MPC chose to enter into individual lease contract with MEPI.

With our motions for reconsideration pending resolution by the PARC, the overwhelming majority of the ARB-members of the DAMARB-MPC hope that the PARC will act in their and their dependent’s best interest, and resolve to uphold the validity of the lease contracts, “ Rivero said.