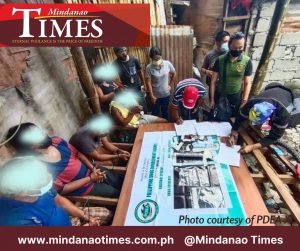 Dimaandal said Jovani Igbalic was the one running the place while the others were his visitors. The arrest came about when Igbalic tried to sell to an agent what was believed as shabu worth  P12,000.

Also seized during the operation were three sachets of what was believed as shabu which had a combined weight of 14 grams worth  P210,000 and other paraphernalia used in illegal drugs.

Dimaandal said the 5 were to be charged before the courts.