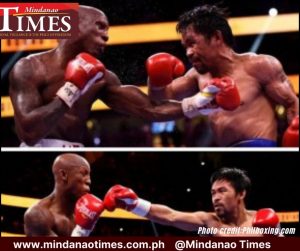 Ugas, who was called to fight the eight-division boxing icon 11 days before the latter was to exchange blows with Errol Spence Jr., convincingly boxed his way to beat Pacquiao and improved his fighting card to 28-4.

Asked after the fight whether he will run for President in the incoming elections, Pacquiao, who has carved a Hall of Fame boxing career, said: “Let me rest first before my family and I make a decision.”

What saved the day for the Philippine delegation was the victory of Mark “Magnifico” Magsayo who downed Mexican Julio Ceja in the 10th round. Magsayo preserved his clean record of 24 victories.

Magsayo, who was outboxed during the earlier rounds, used a vicious right hand to send the Mexican to the canvas and earned him the right to fight for the World Boxing Council featherweight title.

Ugas was invited to fight Pacquiao, turning 43 in December, after Spence was found injured in his eye during a medical checkup two weeks before the fight.

The 35-year old Cuban, who left his home country two years ago after winning a bronze medal in the Beijing Olympics in 2008, threw fewer punches but with better accuracy. This was reflected in the scorecards of the three judges, two of them with identical scores of 116-112, while the third had 115-113.

Father time seemed to have caught the fighting senator from Sarangani as he failed to penetrate the defense of the Cuban especially during the latter rounds when he needed to outscore his opponent.

Ugas established himself as the champion to beat when he, despite Pacquiao’s aggressiveness, hit the latter with jabs in the earlier rounds to ensure that he was way ahead of the counted punches in the latter rounds.

Ugas got the belt of the division after Paquiao was stripped of it when he failed to fight last year, the year the COVID-19 pandemic started. Paquiao won the belt when he defeated Keith Thurman in 2019.