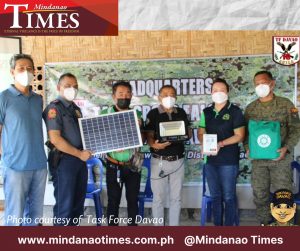 Out of the four solar panels and thermal scanners donated by the company, two of these will go to the Lasang and Sirawan checkpoints of Task Force Davao. The other two will be installed at the Buda and Lumondao AFP-PNP checkpoints.

“We hope that our modest donation will help the security sectors. We hope makakatulong to sa troops sa field,” Acosta, said.

Acosta also took the chance to commend his wife, First District Councilor Mabel Sunga Acosta, the peace and public safety committee chair of the Davao City Council who was also present during the turnover, for encouraging companies to help the military and PNP.

Comia, expressed his gratitude to the initiatives and generosity of the company. “These will go a long way because this will not only benefit the men and women of Task Force Davao but also the community we are serving” the grateful commander said.