LGU ramps up campaign to urge people to get 2nd jab 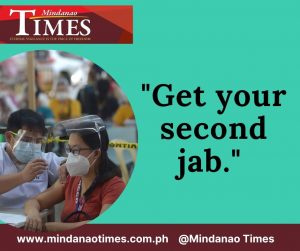 THE LOCAL government here is ramping up its campaign to encourage people who have taken their first doses to get their second jab to be considered fully vaccinated.

This would be an added protection against the ill effects of the coronavirus disease (COVID-19), Mayor Sara Duterte said.

During the interview on Monday over Davao City Disaster Radio (DCDR), Davao City, Duterte said that one of the challenges that the city is facing right now is the missed second doses as some recipients failed to return for their second jab for various reasons.

Also, the vaccines administered to the individual should be included on the Emergency Use Authorization (EUA) List or Compassionate Special Permit (CSP) issued by the Philippine Food and Drug Administration; or Emergency Use Listing of the World Health Organization.

Experts said that completing the required dose by the manufacturer will help reach the vaccine’s maximum potential. Thus, the city mayor urged Davaeños, who received their first dose of a COVID-19 vaccine to make an appointment and get fully vaccinated.

Recently, the city government has increased its inoculation target per day by 15,000 to fast track the vaccination rollout amid the threat of the highly transmissible Delta variant.

It also plans to add more vaccination sites to cater to more Dabawenyos to achieve the target of 70 percent of the city’s 1.8 million population.