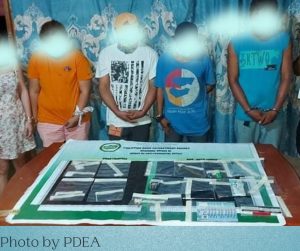 The drug den operator was identified as Joel Talidano, 31, married, and a resident of the said place. He was arrested by a PDEA agent who acted as a poseur buyer for selling a sachet of shabu weighing more or less one gram worth P10,000.

During the operation, he said four-drug den visitors were caught in the act of taking shabu. They were identified as Paulino Bodiongan Jr., Anthoneth Manigo, Donnafe Membrillos, and Gilbert Francis Patiño.

Six sachets of shabu weighing more or less 21 grams with a street value of P315,000, and  11  empty plastic sachets with suspected shabu residue, assorted drug paraphernalia, and the buy-bust marked money were also seized during the operation.