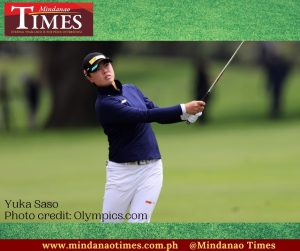 TOKYO – Yuka Saso fired an eagle-spiked six-under-par 65 on Saturday but her last-ditch run fell just short of a medal at the conclusion of the Tokyo Olympics’ women’s golf competition at the Kasumigaseki Country Club.

The 20-year old Fil-Japanese caught fire in her final nine, going six-over over a seven-hole stretch as made five birdies and an eagle at the drivable par-4 17th, which she reached in two before making a short putt.

In all, the ICTSI-backed Saso went a scorching 13-under par over her last three rounds on a 68, 67, and a 65, but an opening round of three-over 74 eventually cost her a place on the podium in her Olympic debut.

Saso wound up with a 10-under 274, climbing from 47th place to a share of ninth. But she finished seven shots behind American gold medalist Nelly Korda and three shots out of a shot at a medal.

Korda wrapped up the gold medal with a closing 69 and a 17-under par 267 total, completing the American sweep of the Olympic golf competitions after Xander Schauffelle won the men’s tournament.

Mone Inami of Japan took the silver after beating Lydia Ko of New Zealand in a playoff, shooting par against the latter’s bogey. The two finished at 16-under 268 after identical 65s in the final round.

Bianca Pagdanganan never really got going in the last three days after an opening 69. She closed out with a 74 marred by a double-bogey at the last and finished with a one-over 285 total, good for 43rd in a field of 60 players.