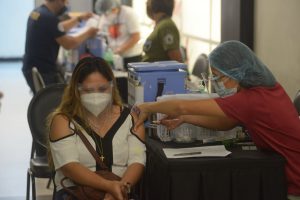 LOCAL officials on Friday clarified that the anti-COVID vaccines in Davao City are not on a first-come, first-served basis, and walk-ins are never a part of the policy.

The city government will stick to the pre-registration and ensure to follow prioritization guidelines.

Dr. Michelle Schlosser, the spokesperson of the COVID-19 Task Force, said some barangays announced a “first come and first served” for the vaccination rollout of the Janssen vaccines on Thursday and Friday.

It has been noted that the “first come and first served” announcement by the barangays drew a mass number of people, queueing early in the morning to get vaccinated.

Some even went home dissatisfied, and some ranted about their frustrations on social media.

Schlosser said that the city government is trying to avoid such commotion in the vaccination rollout.

“We do not want this (commotion), mao nang nagapadayon ta, gina-improve nato ang systema sa pag-register para dili mahitabo ang ingon ani nga commotion and probably basin naay pag break sa protocol and we do not want that (We do not want such commotion that is why we are improving our registration system so that commotion can be prevented and possible breaking of the protocol. We do not want that),” Schlosser added.

The local government targeted to finalize the pilot-testing of the registration system this week and the system rollout soon.

Meanwhile, Schlosser said the city government will stick to the pre-registration process and ensure that priority sectors will get their vaccines.