UM at 75 | Celebrating Diamond in the time of pandemic

By Salud Isabel Petalcorin on August 1, 2021

IT WAS was a K-Pop bonanza as logistics did not hinder the first-ever online celebration of the University of Mindanao’s 75th Foundation Day last July 30, 2021.

With proper planning and communication, lots of optimism, and utilizing the technology available, more than 1, 000 employees across all UM branches from teaching and non-teaching departments, were able to join the online festivities on the Zoom platform, and despite not being in one place together as was the norm pre-pandemic, there was still dancing, jubilation, food, and raffle prizes galore.

Attendees were treated to several surprise congratulatory messages from heads of UM’s partner institutions, such as the Universitas Bhayangkara of Jakarta, Indonesia; and Daugavpils University of Latvia, Europe. 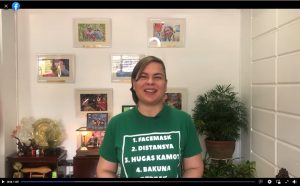 This is testament to UM’s growing list of established ties with universities across the world, but even more exciting were the messages delivered by Philippine president Rodrigo Duterte, and city mayor Sara Duterte -Carpio, who both recognized UM’s contribution in helping to shape Davao city’s education sector since 1946.

UM President and chief executive officer Dr. Guillermo P. Torres Jr also delivered his address; recognizing the contributions of the teaching and non-teaching employees in the middle of the pandemic, and how individual effort collectively resulted in UM not just staying afloat during the worst of the pandemic and lockdowns last year, but even managing to thrive and serve as the university of choice for many Davaoenos; due to UM’s utilization of online enrollment and payment, and early adoption of the online Student Portal and the Blackboard Learning Management System, where students can conveniently access their lessons, check their grades, and monitor any fees or payments they might have.

Loyalty to the university is also recognized every Foundation Day, and those who had 20, 25, 30, 35, 40, and 45 and above years of service to UM in various capacities collected their plaque and monetary rewards in their best formal outfits in a pre-recorded ceremony which was presented on the foundation day proper. Also recognized were the Employees of the Year, Model Colleges, Branches, and Offices, and Golden Harvest awardees; or those who were able to bring national recognition for UM.

Fun and friendly competition was the name of the game in the UM K-Pop Music Video contest, where employees from the six zones were challenged to record music videos for several popular Korean pop songs; but ultimately Zone 3 composed of faculty and staff from UM Tagum, UM Penaplata, UM Tibungco, and UM Panabo blew viewers away with their fiery dance video of BTS ‘Fire,’ cinching their well-deserved first prize.

Due to its popularity, employees per zone also submitted their best TikTok videos that featured either skits, parodies, or dances from popular Korean songs or dramas; and it proved to be a fun time for everyone watching.

Exciting as well, was the eagerly awaited online raffle draw, where employees were made to register online and numbers were flashed on-screen via a random draw. Up for the grabs were beautiful and useful home appliances, laptops and tablets, and cash prizes ranging from P7,500 to two winners of P75, 000! The two P75k prizes were won by lucky personnel from the College of Engineering Education and from UM Tagum. 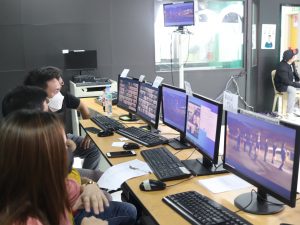 With respect to curfew laws in the city, the night ended earlier than previous foundation day celebrations, but it was definitely a feat to remember as the UM community celebrated its 75th year of operation amidst a pandemic, but making the best of the situation.