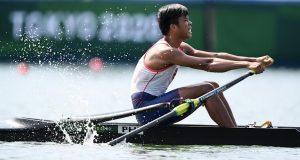 TOKYO — Cris Nievarez completed his Olympic debut by finishing at 23rd place in men’s single sculls of rowing on Friday at the Sea Forest Waterway.

There were 24 participants in the event but for a 21-year-old seeing action in his first Olympics, the future looks bright for Nievarez.

“Cris’s journey as a world-class rower just started in Tokyo,” Philippines Rowing Association president Patrick “Pato” Gregorio said from Manila. “He has a long way to go—still young at 21.”

Nievarez submitted a time of seven minutes and 21.28 seconds to land fifth in the event’s Final D of the classification round. Those numbers were faster than the 7:22.97 he registered in the preliminary round that qualified him for the quarterfinals last July 23.

Greece’s Stefanos Nyouskos was timed 6:40.45, an Olympic best time, to win the gold medal. Norway’s Kjetil Borch (6:41.66) clinched silver and Croatia’s Damir Martin (6:42.58) bagged bronze in the event where Nievarez was one of the shortest participants but the only Southeast Asian rower.

“It took Hidilyn [Diaz] four Olympic cycles to win the gold medal, she never gave up,” he said. “So Cris, don’t give up. He is top 23 in the Olympics. It’s a great way to start.”