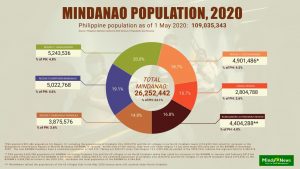 MINDANAO’S population rose from 24.14 million in 2015 to 26.25 million as of May 1, 2020, with Davao City and Bukidnon still the most populous among Mindanao’s 27 provinces and 33 cities and the Bangsamoro Autonomous Region in Muslim Mindanao (BARMM)  posting an annual population growth rate of 3.26 percent, making it the country’s fastest growing region, according to the 2020 Census of Population and Housing (2020 CPH).

Mindanao’s 26.25 million accounts for 24.1% of  the nationwide population.

President Rodrigo Duterte issued Proclamation 1179 on July 6 declaring as official the population count of the Philippines by province, city, municipality and barangay based on the 2020 CPH.

Among Mindanao’s six regions, two have breached the 5 million mark: Region 11 or the Davao region with 5.24 million and Region 10 or Northern Mindanao with 5.02M. Region 9 (Zamboanga Peninsula)  now has 3.88 million, while Caraga remains the least populous at 2.80 million.

The population count in Region 12 (4.90 M) and the BARMM (4.40M) will require adjustments as the populations of Cotabato City and 63 villages in six North Cotabato towns which voted for inclusion in the BARMM in the January and February 2019 plebiscite to ratify Republic Act 11054 or the Organic Law for the BARMM, are still listed under Region 12 as they were still under that region during the May 2020 census. Supervision over Cotabato City and the 63 North Cotabato villages was turned over to the BARMM only in December 2020.

9 with a million count

Sultan Kudarat is the lone province with a population within the 800,000 range.  Three provinces have populations over 700,000 (Lanao del Norte, Davao de Oro and Agusan del Sur); four have over 600,000 (Davao del Sur, Zamboanga Sibugay, Surigao del Sur and Misamis Occidental), three have over 500,000 (Davao Oriental, Sarangani and Surigao del Norte), two have over 400,000 (Tawi-tawi and Basilan) and two have over 300,000 (Agusan del Norte and Davao Occidental).

The least populous provinces are island provinces: Dinagat Islands with 128,117 and Camiguin with 92,808.

The 10 most populous cities in Mindanao are spread across its six regions and have populations ranging from 210,000 to 1.78 million.

From Region 12 to BARMM

At the time of the census in May 2020,  Cotabato City, which voted for inclusion in the BARMM during the January 2019 plebiscite had not been turned over to the BARMM. Cotabato City Mayor Cynthia Guiani-Sayadi, who campaigned against ratification,  appealed to President Rodrigo Duterte in February 2020 to exclude the city from the BARMM until end of the three-year transition period on June 30, 2022.