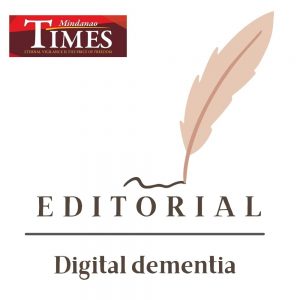 WITH the health pandemic still raging across the world, the use of technology has become so entrenched in our lives, more so with children who have no recourse but study from home using computers and other electronic gadgets. Their use of technology spills over to the way they keep themselves entertained as going outside to play or explore is not yet possible at this time.

Older children who have already been gamers even before the pandemic, are now having more time facing the screen and falling helplessly in the clutches of internet video games. Adults fare no better. From the moment they wake up, the first thing most of them do is reach out for their phones and scroll down to check the latest juicy bit of information from their social media account or new content from an influencer they have been following on youtube, Twitter or Instagram.

Social norms too, have changed. We see friends who, after excitedly taking photos of themselves, the food and the resto, become so engrossed with tinkering, editing and posting their photos on social media that they spend more time working on their phones than actually talking to each other.

Most people are now glued to the small screen on their mobile phones, unmindful of the potential for accidents such as walking or driving. For many, it becomes unthinkable to lose their connection to the virtual world, a world that has become their reality.

Neuroscientist Manfred Spitzer has  coined the term “Digital Dementia” in recent years to describe “an overuse of digital technology resulting in the breakdown of cognitive abilities” similar to those who have suffered “ head injury or psychiatric illness.” He proposed that “short-term memory pathways will start to deteriorate from underuse if we overuse technology.”

As we grapple with the pandemic and how it has affected our lives, we should also be cognizant of the impact of technology on our family’s mental health.

Published in EDITORIAL and OPINION