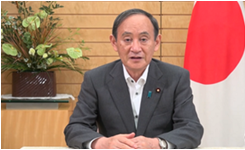 IN CELEBRATION of the 65th Anniversary of Japan-Philippines Friendship, Japanese Prime Minister Suga Yoshihide and Philippine President Rodrigo Duterte shared video messages commemorating this very important occasion. In the  video messages, both leaders expressed their well-wishes as Japan and the Philippines marked a milestone in their diplomatic relations.

Released on 28 July 2021, Prime Minister Suga conveyed his appreciation for the strong bond between the two countries. In his video message, he remarked that the bond between the two nations has never been stronger, and highlighted their successful collaborations throughout the years.

Likewise, Prime Minister Suga highlighted the infrastructure development in the Philippine. As a huge supporter of the “Build, Build, Build” programme, Japan has been a reliable partner of the Philippines through public and private sector engagement. Among the major undertakings of such a partnership is the Metro Manila Subway Project, the Philippines’ first-ever subway line that will soon serve many Filipinos.

Moreover, Prime Minister Suga also announced that Japan has successfully fulfilled its 2017 five-year commitment to public and private financing of one trillion yen (approx. 476 billions pesos) to support the Philippines.

The video message also harkens on the legacy of Japan’s engagement in peace-building in Mindanao. Prime Minister Suga reaffirmed this commitment to reinforce Japan’s support in ways commensurate with the progress of the peace process. Japan has been a long time partner of the Philippines in promoting the lasting-peace and development in Mindanao, and will continue to do so in the years beyond.

Furthermore, Prime Minister Suga also underscored the shared values of Japan and the Philippines as maritime nations. With the aim of realizing a “Free and Open Indo-Pacific,” PM Suga emphasized that Japan will continue to proactively advance cooperation with the Philippines. This includes the collaboration on the enhancement of maritime law enforcement capacity of the Philippine Coast Guard, and  its  activities in the Sulu and Celebes Seas and their surrounding seas.

The message ends on a hopeful note. Prime Minister Suga is optimistic that the legacy of the past 65 years of friendship will provide the momentum for further deepening relations between the two countries.

In a similar vein, President Duterte shared the same celebratory message, reiterating that “Japan is a friend closer than a brother.” He highlights that the bilateral relationship of Japan and the Philippines is among those that are deeply transformative, and one that is marked by one triumph after another.

President Duterte also shared his well-wishes for the success of the Tokyo 2020 Olympic and Paralympic Games. He praised Japan’s hosting amidst the pandemic as an enduring symbol of humanity’s unbowed spirit.

The President’s message concludes with his hopes that the shared future of Japan and the Philippines remain bright.