AUTHORITIES arrested two individuals for carrying a gun and illegal drugs while passing through the Lasang checkpoint in Barangay Alejandra Navarro on July 25. 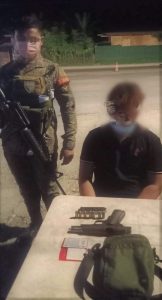 According to the report, Espartero was on board a Mitsubishi Strada pick-up truck traveling toward the city when flagged down for inspection at the checkpoint.

They recovered a .45 caliber pistol and one magazine loaded with seven bullets.

On the same day, Arnel Alberca Pacquiao, 38, single, a resident of Barangay Bitas, Cabanatuan City, Nueva Ecija, was arrested for marijuana weighing more or less 88 grams with an estimated street value of P13,200.

He was on board a Ford Ranger pick-up truck traveling toward the city. He faces a case for violation of RA 9165.

“I congratulate our troops for a job well done. These accomplishments show the patience and determination of Task Force Davao personnel in conducting checkpoint operations. We shall remain focused in our support to law enforcement operations in Davao City amidst pandemic,” Col. Darren Comia, commander of Task Force Davao, said.