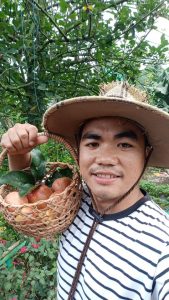 DAVAO CITY (MindaNews) – It started out as an experiment seven years ago for Benzone Kennedy F. Sepe, who took three healthy seeds of a supermarket-bought Fuji apple and planted them in the backyard of their home at Sitio Marawer, Barangay Kapatagan in Digos City. 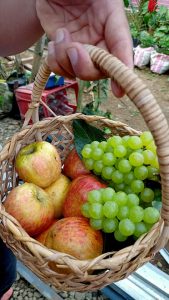 All seeds sprouted weeks later, of which only one survived.

Sepe, 29, a farmer’s son, now oversees his own small apple orchard on the foothill of Mount Apo planted to 330 trees, all propagated using that backyard-grown apple tree.

He said it was his two-month trip to South Korea in 2015 that inspired him to pursue apple-growing after he learned how successful farmers there with propagating tropical mangoes despite the cold climate with the right technique and technology.

After returning home, Sepe tended to his apple tree and researched to know the techniques on apple growing and husbandry.

His efforts paid off after seeing it bloom in 2018.

But Sepe, a graduate of Agricultural Technology at Davao del Sur State College (DSSC), said he was not expecting much from this lone apple tree without other trees of its kind to pollinate in Kapatagan, a community popular for vegetables, highland bananas, and coffees.

Sepe told himself it would not bear fruits unless what he planted in 2014 was that “soil-fertile seed” that could produce fruits on its own but so rare that it occurs only at a rate of about one in every 10,000 apple seeds.

Three weeks later, he was shocked to see the flowers turn into fruit buds.

“It felt like I hit a jackpot,” he said. 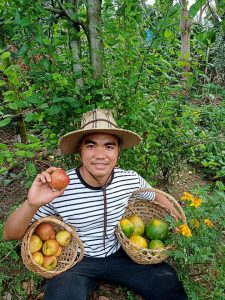 Sepe sent some of his backyard-grown apples to DSSC for “Brix” testing to measure the sweetness or the sugar content.

Results showed that the Kapatagan-grown apples turned out much sweeter, scoring 17.5 degrees Brix, much higher as compared with 13 degrees of the commercial apples. Export quality apples, he said, must meet the standard of at least 12 degrees.

Although known to grow in countries with cool weather, Sepe said apple trees like to grow in full sun.

He surmised that longer sunlight exposure contributed to the sweetness of the local apples. Sepe believed that Kapatagan apples could also grow at low elevation.

“This only shows that it’s really feasible to grow apples in tropical countries,” Sepe said.

He added that there are more advantages to growing apples in the Philippines because it is possible to harvest fruits all year round, thanks to its favorable climate.

“In Kapatagan, we can harvest apples in four to five months. So, it’s possible to harvest thrice in a year and a half. In other countries, they can harvest once a year only because they have winter,” Sepe pointed out.

Apple trees grafted with a branch from a full-grown tree, he noted, will start bearing fruits in two to three years.

Sepe said each tree can yield at least 90 apples per harvest. 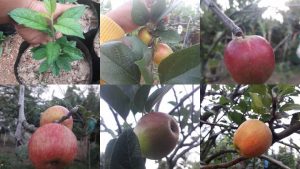 He said he is still in the thick of things to improve productivity. A well-meaning lawyer from Cebu has been helping him source out the Geneva 890 rootstocks from the United States so that his trees can see better yield.

He said rootstocks are used to propagate more apples through grafting.

At least 30 trees were planted on a 600-square-meter property where their house stood and another 300 trees on a separate half-hectare property that his family owned, surrounded by a plantation of Cavendish bananas for export.

Sepe said he could not afford to buy another property to set his expansion plans into motion.

He said he desired to plant more apple trees as his contribution to reforest Kapatagan, now denuded to give way to vegetables and bananas.

Aside from apples, he also grows other fruits, including grapes, strawberries, pears, citrus, pomegranate, dragon fruit, lime, figs, and kesusu.

He envisioned making the production of the Kapatagan-grown apples commercially viable in 5 to 10 years, making them available locally and abroad with “Benzone Apples” as the brand.

His 330 apple trees can produce 3,000 pieces in one harvest season once they become productive, Sepe added.

He said the Agricultural Training Institute of the Department of Agriculture-Davao accredited last year his orchard as a learning site for apple growing, the first in the Philippines, where he gives lectures to visitors.