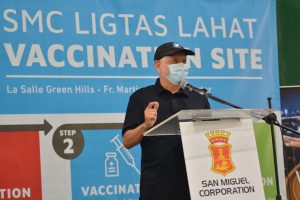 “We thank the De La Salle Brothers for partnering with us in vaccinating even more Filipinos, particularly NCR-based workers and their families. We also thank the local government of Mandaluyong and the National Task Force Against Covid-19 for helping make this launch possible. We are vaccinating for free over 70,000 in our workforce. We are also looking to make the vaccines available to more Filipinos, by extending access to those in our workforce’s own networks,” said Ang.

“This way, we can help achieve herd immunity for our country, ensure that more lives are safe, and get our economy back on track sooner than later,” he added.

Once fully operational by August, the La Salle Green Hills site will be able to accommodate up to 1,000 persons per day. SMC has purchased vaccines from Astra Zeneca and Moderna for its nationwide vaccination effort. The vaccines are set to arrive by next month. 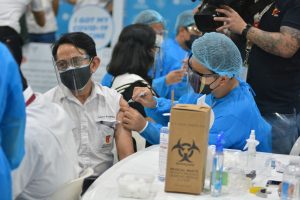 “We are happy that President Duterte has approved the start of vaccination for essential workers, as they are key to putting the economy back on track. For our part, San Miguel commits to take care of our own, so that when larger volumes of vaccines arrive, they will no longer need to rely on government supplies–which can then be given to more of our countrymen,”Ang said.

To commemorate the event, some 500 essential workers from SMC received their initial doses of the Sinovac vaccine at LSGH, through the COVID-19 Inter-Agency Task Force on Emerging Infectious Diseases (IATF) and the City of Mandaluyong.

Meanwhile, another vaccination site, Jose Rizal University in Mandaluyong, which is jointly-managed by SMC and the City Government, will also continue to accept individuals under the A4 category.

A number of SMC’s own medical staff are posted at the JRU site to boost the local government’s ongoing vaccination effort.

SMC has been deploying its own, mostly newly-hired medical staff to various LGUs to help out at understaffed vaccination sites.

The company is looking to hire some 300 medical professionals composed of nurses and doctors, for its vaccination program, and to help partner LGUs implement their vaccine rollout.

To date, over 100 have been hired and deployed to vaccination sites in Mandaluyong, Manila, Quezon City, and Malabon. More will be deployed to Paranaque and Pasig cities.

Earlier, SMC also encouraged employees and their families under the A2 (senior citizens aged 60 and above) and A3 (persons with comorbidities) to get jabs at areas where they are residing after a recent surge of cases that necessitated another lockdown.

Better World EDSA, the company’s own RT-PCR testing laboratory, raised the government’s testing capacity and made testing more accessible to the public.

The company also supported medical front liners through donating P9.5 million worth of fuel donated to the government’s free shuttle service program and waived P230.7 million in toll fees to date to benefit over 10,000 medical workers.

During the first few months of lockdown last year, SMC reconfigured its liquored operations to produce and donate some 1.3 million liters of disinfectant alcohol to hospitals and vital installations nationwide.