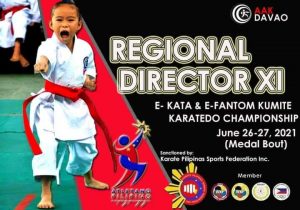 CLOSE to 100 entries are expected to show their wares in the 2021 Association for the Advancement of Karatedo (AAK) Davao Region XI Directors Cup E-Kata and E-Fantom Kumite this June 26 and 27.

According to Tan, medals and certificates will be given to all winners in their respective age group categories which starts from six to eight years-old and over.