DAVAO CITY (MindaNews) – Mindanao’s COVID-19 cases have breached the 100,000 mark as 30,000 more cases were recorded across its six regions in the month of May, the highest monthly total since March last year, overwhelming the healthcare system in several areas as hospitals and temporary treatment and monitoring facilities are full or near full capacity.

Data collated by MindaNews from reports of the five regional offices of the Department of Health in Mindanao and the Bangsamoro’s Ministry of Health show that Mindanao’s total number of cases was 70,305 on May 1. By May 31, it had risen to 99,683 or 29,558 more. By June 1, the number rose to 101,632

“Tumataas nang mabilis” (increasing at a fast rate), Health Secretary Francisco Duque said of Mindanao’s COVID-19 cases, in his report to President Rodrigo Duterte during the latter’s “Talk to the People on COVID-19” on May 31. Duque, however, did not cite reasons behind the surge in Mindanao.

The Inter-Agency Task Force on Emerging Infectious Diseases (IATF) placed the cities of Zamboanga, Cagayan de Oro and Butuan and the provinces of Zamboanga del Norte, Zamboanga del Sur and Zamboanga Sibugay and Agusan del under Modified Enhanced Community Quarantine (MECQ) from June 1 to 30 while the cities of Iligan, Davao City, Cotabato and the province of Lanao del Sur remain under General Community Quarantine (GCQ). The rest are under Modified GCQ.

The IATF, however, granted the request of the Davao City government to place the city under MECQ from June 5 to June 20, due to the spike in COVID-19 cases.

Zambo region tops first half of May, Northern Mindanao second half 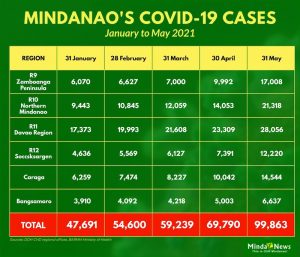 MindaNews’ monitoring of Mindanao cases since last year has been based on the daily statistics from the DOH regional and MOH.

Region 9 or the Zamboanga Peninsula actually recorded the highest number from May 1 to 15 with 3,391 cases but Northern Mindanao took the lead in the second half of May with 4,652.

Among Mindanao’s 33 cities, Zamboanga City posted the highest increase in cases in May followed by Cagayan de Oro , Davao City and General Santos. These are the four cities whichrecorded an increase of over a thousand cases in the month of May.

The DOH Center for Health Development (DOH-CHD) regional office in a press release on May 31 said samples collected from Zamboanga City, Zamboanga Sibugay and Zamboanga del Sur from March 29 to May 5 tested positive of the three variants: two B.1.1.7 and 54 for B.1351, and one for P.3.

Samples taken in Mindanao are sent to the University of the Philippines-Philippine Genome Center (UP-PGC) in Diliman, Quezon City for whole genome sequencing (WGS). The results are known weeks later. The PGC in the UP Mindanao campus in Davao City will soon start its pilot sequencing covering the entire Mindanao in collaboration with Accessible Genomics, Research Institute for Tropical Medicine and University of Glasgow, said PGC Mindanao program director Dr. Lyre Murao.

Murao said they are applying for ethics approval under the Single Joint Research Ethics Board of the DOH central office. The Research Institute for Tropical Medicine is “facilitating this for us and we are constantly communicating with them for updates.” The Center is also awaiting approval from the Institutional Biosafety and Biosecurity Committee of UP Mindanao.

The press release of DOH in Region 9 did not say in what areas were the variant cases recorded but the City Government of Zamboanga posted on its Facebook page on May 31 that the DOH and UP-PGC confirmed on May 30 that based on tests conducted on 257 samples sent by the DOH regional office starting March 25, 2021, “52 were found to be cases of variants of concern, of which 51 were cases of the South African variant while one case was Philippine variant.”

Of the 52 cases, 37 had fully recovered while 15 died, but it added that “some of those who expired had co-morbidities.”

The DOH central office in a press release on May 4 said B.1.351 is “the most common variant among the samples sequenced with assigned lineages.”

All 13 B.1351 cases are residents of Surigao del Sur: seven in Bislig, four in Lianga one in Cortes and one in Tandag City. According to DOH Caraga, two of these patients — one from Bislig and one from Cortes – “died while admitted in the hospital.”

Out of the 21 variant cases, 13 have no travel history outside their area while eight are close contacts of previously confirmed cases. The DOH-Caraga added that 18 “are already asymptomatic and back to their normal daily routine” while one is still recovering at home.

The cities of Davao and Cagayan de Oro are still awaiting results of the samples sent to the UP-PGC.

Dr. Ashley Lopez, acting head of City Health Office in Davao City said on Wednesday over the city-run radio station DCDR that the surge in COVID-19 cases could have been caused by the presence of an “undetected” variant of SARS-CoV-2.

He said he was alarmed that the increase in new COVID-19 cases is sudden not gradual.

“I cannot confirm this yet but I suspect that there is a variant that’s going around because the increase in new cases is very fast… we have yet to receive a report from Philippine Genome Center. I believe it is because it’s seven times faster than what we had last October and November,” he said.