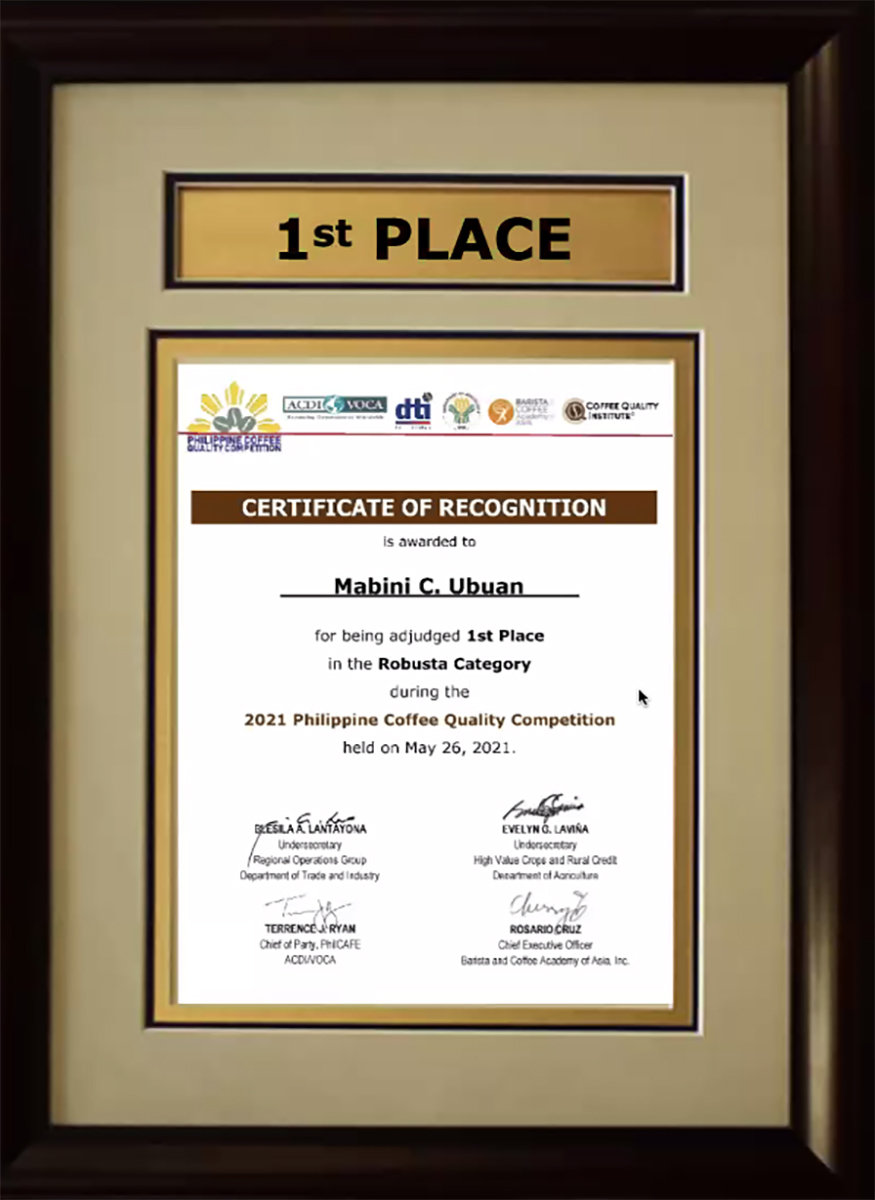 “I’m really thankful to God that I’m given this blessing of winning this year’s competition and I am so glad of this achievement,” expressed Arellano upon learning of the competition’s results on Wednesday, (May 26, 2021) which were announced through a live video feed on social media. 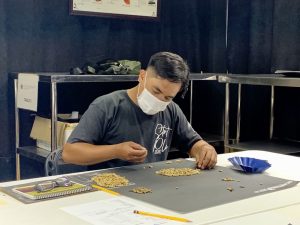 She added that she gave her best for this competition and attributes her winning to good agricultural practices particularly in following the recommended processes and by religiously adhering to protocols and proper handling of coffee products she learned in the post-harvest handling and processing training organized by the Philippine Coffee Advancement and Farm Enterprise (PhilCAFE) Project following the standards of Coffee Quality Institute.

Two of the top six winners in the Specialty Arabica category participated in the training which strengthened their knowledge and skills on post-harvest handling and processing of coffee products.

“We must combine diligence with great love for our coffee to produce high quality products. Coffee farming does not only provide us income, but it also offers us a brighter future,” explained Arellano.

The PCQC is an annual event that seeks to heighten the consciousness of Filipino farmers on coffee quality and increase their competitiveness in the local and global markets. Last year’s competition, however, was cancelled due to the COVID-19 pandemic.

“Even with last year’s cancellation, the competition still managed to grow with the increased number of entries, particularly in the fine Robusta category,” said TJ Ryan, Director of the PhilCAFE Project.

This year’s competition gathered a total 103 official entries from 12 regions in the Philippines, 69 of which are Robusta, 31 are Arabica, and three are Exelsa coffees.

Because of the COVID-19 travel restrictions, simultaneous judging of entries which included green coffee bean grading followed by roasting and cupping sessions by Philippine-based licensed Q graders were done in Davao City and Manila, while final cupping of top entries by international judges were conducted in the Philippines, Indonesia, Singapore, and Taiwan.

DTI’s National Coffee Industry Cluster Coordinator and Regional Director for Cordillera Administrative Region Myrna Pablo said she has witnessed the beautiful transformation of the annual competition since it began in 2018.

“In PCQC, we put value and emphasis on the importance of quality coffee relative to consumer safety, market trust, value adding, and sustained livelihood of our stakeholders, she added.

Shaun Ong of Bettr Coffee Co. in Singapore who is the head judge of this year’s competition said that this year’s entries have shown that the quality of Philippine coffee is improving year after year.

“I was blown away by this year’s entries. The top three Arabica winners are among the best in the Philippines, while the Robusta top three winners are the best that I have tasted as a judge in the last four years. As a whole, the qualities of the entries are improving,” he added.

The other coffee entries that made it to the top six list for the Specialty Arabica category were the submissions from Marifel dela Cerna of Bansalan, Davao del Sur that garnered the fourth place, the entry of George Dapliyan of Sagada, Mountain Province that secured the fifth place, and the coffee of Maria Luz Dubria of Bansalan, Davao del sur which landed in the sixth place.

Meanwhile, in the Fine Robusta category, the entry of Rodolfo Aciong of Quirino, Ilocos Sur secured the fourth place, while the entries of Juana Bitongan of Gregorio del Pilar, Ilocos Sur and Pablo Helomoc of Pangantucan, Bukidnon were judged as fifth and sixth placers, respectively.