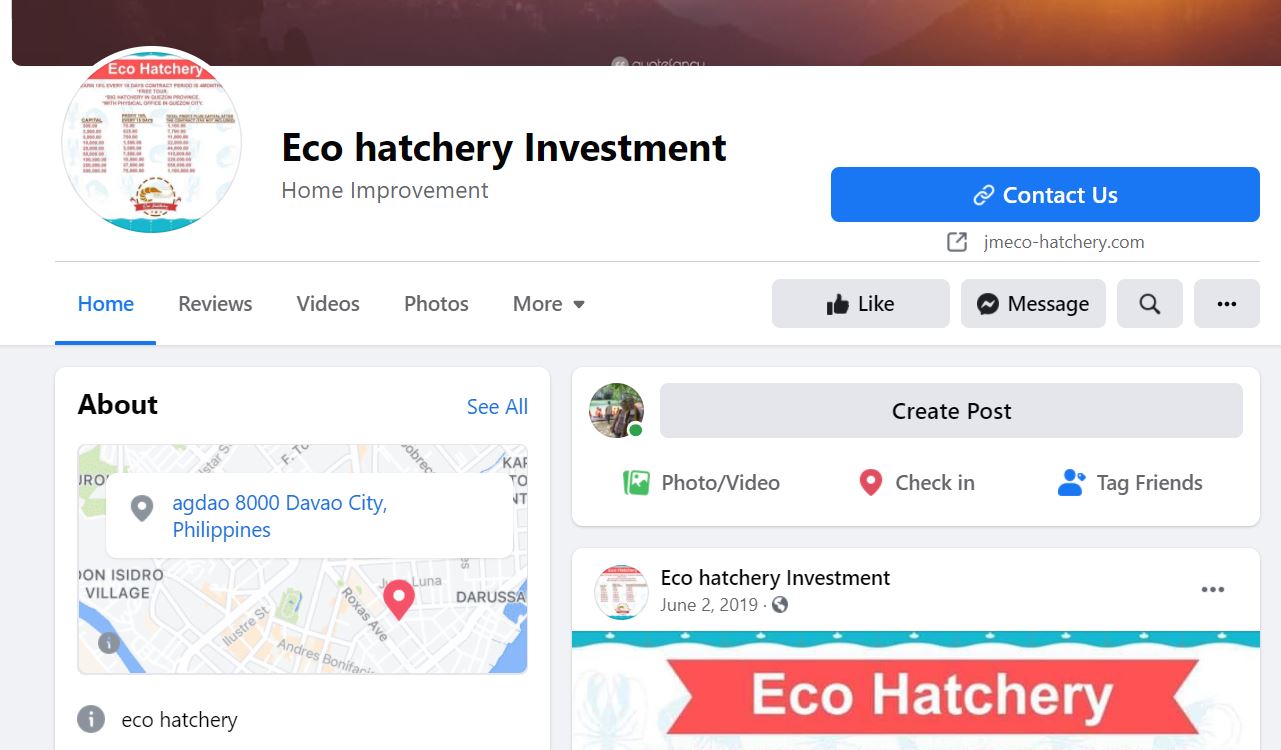 THE SECURITIES and Exchange Commission (SEC) has revoked the corporate registration of Eco Hatchery and Trading Corporation for soliciting investments from the public through a Ponzi scheme.

The SEC Enforcement and Investor Protection Department (EIPD) issued the order on April 23 after finding that Eco Hatchery has been offering and soliciting investments without the necessary secondary license from the Commission.

In doing so, Eco Hatchery committed an ultra vires act under Section 44 of Republic Act No. 11232, or the Revised Corporation Code of the Philippines.

The company’s activities also constituted serious misrepresentation as to what it can do, to the great prejudice of or damage to the general public, a ground for the revocation of a corporation’s certificate of registration under Presidential Decree No. 902-A, the order read.

The Commission has warned the public against investing in Eco Hatchery as early as February 3, 2020, through an advisory. The company did not react to nor refute the advisory against it.

A show cause order was subsequently issued by the EIPD against Eco Hatchery, directing the company to explain why its certificate of incorporation should not be revoked.

Eco Hatchery entices the public to invest with the promise of earning 15% every 15 days in a span of four months. For example, an investment of P500 would yield a profit of P75 every 15 days, for a total of P1,100 after four months, including the original investment.

The company also claimed that it operated a hatchery in Quezon province as well as a physical office in Quezon City.

The EIPD noted that Eco Hatchery’s compensation plan partakes of the nature of securities, particularly an investment contract, whereby a person invests his money in a common enterprise and is led to expect profits primarily from the efforts of others.

As a form of security, investment contracts must be registered with the SEC before they can be offered or sold within the Philippines, pursuant to Section 8 of Republic Act No. 8799, or the Securities Regulation Code.

However, records of the Commission show that Eco Hatchery is not authorized to solicit investments from the public as it has not secured the prior registration and/or license for such activities.

The EIPD noted that Eco Hatchery’s main strategy is actually to earn from the recruitment of new members or investors, presented in the guise of running a prawn, shrimp, crab and fish farm.

“Necessarily, this scheme is unsustainable, as it must rely on a continuous inflow of new investors in order to make payouts to earlier investors,” read the order.

“[T]he scheme being offered by Eco Hatchery/Eco Hatchery and Trading Corporation is clearly in the nature of ponzi scheme where the profits or payouts shall be taken from incoming investors or additional pay-ins of existing members-investors considering that it does not have any underlying legitimate business from where it could source its promised return on investments to its investors.”

The EIPD also emphasized that Eco Hatchery’s Articles of Incorporation explicitly stated that it “shall not solicit, accept, or take investments/placements from the public neither shall it issue investment contracts.”

Further, the EIPD found Eco Hatchery to have committed fraud in the procurement of its registration, as its stockholders/directors/incorporators Jose Marie Baquiran, Symphony S. Mondragon, Abner A. Pacheco, Lorenzo N. Mendez, and Stephen R. Cervantes provided wrong addresses in its Articles of Incorporation.

“WHEREFORE, for violation of Section 44 of the Revised Corporation Code of the Philippines (R.A. 11232) in relation to Sections 8.1, 28.1 and 26.1 of the Securities Regulation Code, P.D. 902-A and Section 179 (j) of the RCCP, the Certificate of Incorporation and the registration of ECO HATCHERY AND TRADING CORPORATION as a corporation, is hereby REVOKED,” the order read. SEC