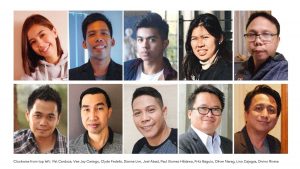 TEN SONG writers from various areas of the Philippines and abroad were named winners of Viva Musika 2020. The Viva Music Group today announced the results of the massive talent search aimed to discover promising unsigned composers.

The diverse lot includes a flight attendant, two lawyers, a seaman, an accountant and singer-songwriters dreaming of success in the music business. They each received one hundred thousand pesos in advance royalties and were signed to exclusive contracts with Viva Music Publishing. The songs of the winners will also get the chance to be used in a Viva production.

“This search is a continuation of Viva’s long-running efforts to look for hidden talents and to nurture their music careers to the fullest potential,” says Del Rosario.

“I have heard the song entries and I believe that these Viva Musika discoveries will be creating a lot of hits for us. I am very excited to release their songs into the market.”

Entrants to the search were asked to submit three unreleased compositions. After screenings by industry experts and lay people, the songwriters who received the highest scores for those three songs were named winners of the search.

These are:Pat Cardoza from Tondo, Manila with Mahal, Kailan Ka Babalik and Back to You; Vee Jay Cariego from Cebu with Miss, Miss Maayag, Key of G and Kalit; Clyde Fedelis, from Quezon Province with Isang Banayad na Pag-Indak, Kahit Hindi Magkaintindihan and Mission Forever; Dianne Lim from Quezon City with Umaasa, Kahit Wala ng Pagtingin and Dito Na Lang Tayo; Fritz Baguio from Cebu with Sabik, Dinaba and Thanks for Loving Me.

“The music business is dependent on compositions and these compositions are the works of composers,” continues Del Rosario. “We cannot have the hit songs without these talented creators and Viva is very lucky to have ten exciting songwriters added to its roster.”

Del Rosario has been at the forefront of the local music scene since he formed Vicor Music Corporation back in the late 60s. He steered Vicor to the pinnacle of success as the leading proponent of original Filipino music.

Along with that, Vicor discovered and led some of the greatest songwriters in the country to the peak of their careers. Among these were George Canseco, Willy Cruz, Jose Mari Chan, Tito Sotto, Vic Sotto and Joey de Leon, the Juan de la Cruz Band with Pepe Smith, Wally Gonzales and Mike Hanopol, Dennis and Rene Garcia of Hotdog, Rey Valera, Yoyoy Villame, Freddie Aguilar, Odette Quesada and many others.
The quest for hitmakers continued when Del Rosario formed Viva Records thirty-nine years ago.

Viva Records saw the release of memorable songs from Vehnee Saturno, Louie Ocampo, Ogie Alcasid, Moy Ortiz, Edith Gallardo, Freestyle, Rivermaya, Itchyworms, Soapdish and in present time, the Juans, ALLMO$T, John Roa, Juan Caoile, This Band, Karencita, Because, Caleb Santos and many more.
Del Rosario has decreed that the Viva Musika Composer Search will now be an annual event for the Viva Music Group. He is hopeful he will find more composers with the songs that will become classics in the future.