Ancajas to stake his crown against Rodriguez on April 10 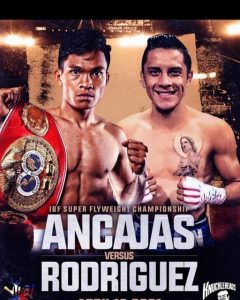 Under the watchful eyes of manager-trainer Joven Jimenez, Ancajas has being sparred by Jonas “Zorro” Sultan (16W-5L-0D, 10KOs) and Eumir Felix Marcial both of Zamboanga City.

The 29-year-old Ancajas (32W-1L-2D, 22KOS) will be making his 9th title defense of the crown he won against McJoe Arroyo of Puerto Rico via a unanimous decision in 2016 at the Jurado Hall of the Philippine Marine Corp, Barangay Fort Bonifacio in Taguig City.

Ancajas did not have a fight last year because of the pandemic caused by COVID-19.

His last fight was against Miguel Gonzalez of Chile, who he beat by a technical knockout in the 6th round on Dec. 7, 2019 in Mexico.

Simmons said that “Rodriguez is a traditional Mexican kid in great shape”.