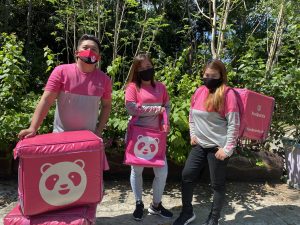 The delivery service is an exciting sector because it’s growing so fast. These days, it’s hard to spend a night at home where one can chill and chow without ordering from foodpanda. However, the huge impact it makes to the restaurant industry won’t be possible without its fleet of riders. The men and women of foodpanda serve as the hands and feet of the consumers who simply want their food and grocery to be safely delivered straight to their homes and workplaces.

That’s why as an on-demand food and grocery delivery service, foodpanda never stops to create programs designed to help its partners and those in need.  Embracing its impact on everyone’s lives beyond offering top-quality delivery of food and grocery needs, foodpanda rolled out the PandaTODA program. The initiative was designed to help idle tricycle drivers get back on the road with new livelihood and purpose.  Here, three tricycle drivers share their stories.

There is palpable happiness in the voice of Antonio Sarmiento, a tricycle driver of 13 years. When asked if he was ready to accommodate a few questions, he quipped, “Ok lang po, basta wag lang tungkol sa babae.”

There is reason to believe that his tone was much different last March. Upon learning that they had to stay off the roads and stay inside their homes, he was left clueless on what to do next. He had no idea how else to make a living and had no choice but hope for the best.

A few months later, Sarmiento was informed by his local Tricycle Operators and Drivers’ Association (TODA) that foodpanda is presenting drivers like him with a new job opportunity as a rider. Excited, he quickly enlisted his name under the program along with 18 of his friends.

Making the transition from transporting passengers to food orders, however, was no small task. The biggest adjustment was operating on a much larger area, as opposed to the limited routes granted to tricycle drivers. Nonetheless, Sarmiento was quick to adjust, and is now happy and settled as a foodpanda rider.

Unlike the veteran Sarmiento, Jun Sanchez was just starting his career as a tricycle driver when the ECQ was imposed.

Sanchez lived in Butuan most of his life. He decided to try his luck in Manila and took the first job available to him as a tricycle driver. But just when he was making his strides, he was told that they had to stop operations.

Sanchez spent the following months sustaining his family using the small savings he was able to set aside. And just before it was depleted, he received an invite to join the PandaTODA program.

Aside from giving him new ways to earn money, the PandaTODA program also afforded him the work flexibility that he has never experienced in his life.

A mix of excitement and anxiety was likewise felt by John Bolanos when he was told about the PandaTODA program.

He was ecstatic about the new opportunity, but also nervous about the prospect of starting in a new job, under a new system, after working as a tricycle driver for 8 years.

Bolanos clearly remembers to this day his main concern during his very first delivery.

He clears that nothing was spilled that day, and it was a successful delivery that ended with an exchange of smiles with a happy customer.

While he was anxious about entering the PandaTODA program, Bolanos quickly learned that foodpanda has set up an efficient system that helps newbies like him ease into the program.

While life has been anything but easy for anyone in these trying times, foodpanda continues to deliver solutions to help people in any way possible. Under the PandaTODA program, tricycle drivers get more than new livelihood. They also enjoy the perks and rewards that go with being part of the foodpanda family.