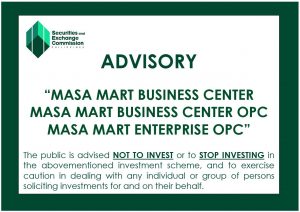 The Securities and Exchange Commission (SEC) has cautioned the public about Masa Mart Business Center, which has been posing as a multi-level marketing program to entice the public into its unauthorized investment schemes.

In an advisory dated January 12, the Commission urged the public to avoid or stop engaging in the investment-taking activities of Masa Mart and its related entities or representatives, as they have yet to file the requisite registration statement nor secure the approval of the corresponding permit to sell for such activities.

Masa Mart was found to be offering a Subscription and Gains Program, under which a member may invest at least P1,250 to P500 million, in exchange for returns of P2,746 to about P11.65 billion, depending on the lock-in period. This entails an interest of up to 30% per month or up to 2,561.81% per year.

The group also offers The MMBC P5,888 Combo Package, where members could invest P5,888 for promised gains of P20,000 after six months; and the Do It Yourself Subscription of 24 months, Roll-over Program, where members could generate an income of P100,000 to P12 million after two years.

Other offers include the United Masa Coin (UMC) or the XUM Coin, which is purportedly a cryptocurrency promoted through a software-controlled app called UmcUSDTBot, as well as a referral program, among others.

Masa Mart is registered with the Commission as a One Person Corporation under the Revised Corporation Code, and with the Department of Trade and Industry. However, such registrations only grant the company juridical personality and does not authorize it to issue, sell or offer for sale securities to the public nor engage in business activities requiring a secondary license from the SEC.

Additionally, Masa Mart does not appear among the registered banks, exchanges, or companies engaged in digital assets with the Bangko Sentral ng Pilipinas. Neither UMC nor XUM are also included among the list of generally accepted virtual currencies posted on the World Coin Index and Coin Market Cap websites.

Those who act as salesmen, brokers, dealers or agents of fraudulent investment schemes may be held criminally liable and penalized with a maximum fine of P5 million or imprisonment of 21 years or both under the Securities Regulation Code.

Republic Act No. 11469, or the Bayanihan to Heal as One Act, further penalizes those participating in cyber incidents that make use or take advantage of the COVID-19 pandemic to prey on the public through scams, phishing, fraudulent emails, or other similar acts with two-month imprisonment or a maximum fine of P1 million or both.

Reports of unauthorized investment solicitation activities may be emailed to the SEC Enforcement and Investor Protection Department at epd@sec.gov.ph.