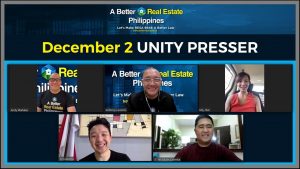 THE movement to push for amendments of the Real Estate Service Act of 2009 (RESA) has gained strong support as some of the country’s largest real estate organizations join the call of A Better Real Estate Philippines (ABREP) for changes in the law which hopes to address the growing 6.5 million housing backlog. Experts say the backlog is expected to balloon to 22 million by 2040 and leave millions of Filipino families without formal housing if left unaddressed.

ABREP, a movement that seeks to increase livelihood opportunities for Filipinos, promote the use of technology in real estate, and bolster the salesforce so that the backlog can be addressed, is currently engaging industry stakeholders, including practitioners, developers, and even the regulatory bodies.

In a virtual press conference, ABREP President Anthony Leuterio said, “RESA is a pre-automation law that does not serve the purpose it was intended to. It was supposed to professionalize the industry, but instead, it’s stopping the industry from progressing.”

“RESA is not a perfect law; that is why it is subject to change. We, as an association, should remain receptive to changes in regulations,” said REBAP National Board Edwin Calamba. “Our group is supporting ABREP in amending the RESA not just for a select few but for the betterment of the whole industry.”

Moreover, Leuterio revealed that ABREP has already reached out to the Professional Regulation Commission (PRC) regarding their proposed amendments and that they are awaiting further feedback.

“We are not alone in our call to amend RESA. Real estate practitioners and developers have all united to make this a better law for Filipinos. At ABREP, we believe that with their guidance, the next version of RESA will do much more to serve the Filipino,” he said.

ABREP’s position that RESA is anti-poor has been a rallying call to amend RESA as early as 2016. CREBA, the largest organization of developers in the Philippines, has decried RESA’s Section 14 for what it calls “discriminatory scholastic requirements,” referring to both the expensive and onerous Bachelor of Science in Real Estate Management (BSREM) degree requirement for brokers as well as the 2-year college requirement for salespersons.

“We will be depriving these individuals the chance to partake in the economic benefits of real estate,” said CREBA National President Noel Cariño in a 2017 statement. “Many of them have been there working for so long, and then they will be suddenly cut-off because they cannot qualify for registration.”

For years, several controversial provisions in RESA have been at the center of public outcry. One such provision that has recently been highlighted by the law’s critics is Section 32’s rule on the 1-is-to-20 ratio for real estate brokers to salespersons.

“We cannot sell so many real estate units if we do not have enough agents, which is restricted by this 1-is-to-20 rule. The law provides that only those who are graduates of BSREM can apply to become a licensed broker—and less than 100 people graduate from this course, a big number of which are not passing the board exam,” said NREA’s immediate past president Benny Cabrieto Jr. in last week’s press conference.

Renowned real estate developer, consultant, and TV host RJ Ledesma echoed the sentiment that RESA’s current restrictions to brokers, salespersons, and the overall salesforce has aggravated the housing backlog by depriving developers of a provincial network of on-ground touchpoints.

“The largest amount of housing backlog is not found in the city, it is out there in the province, the rural areas. How do we identify where to put up those houses for people who need it? And how do we connect the developers to these places?” said Ledesma. “The developer has no means because he has no one to market there. We need more people to help us identify these underserved areas.”

Veteran realtor and co-founder of Havitas Development Corporation Andy Mañalac noted that because RESA was not crafted with digitalization in mind, legal grey areas have formed when it comes to advertising and the alleged penetration of foreign transaction platforms.

He said, “Brokers have their own teams, but who can do posting on social media for them? They have their secretaries who do posting and boosting for them, and yet, it is still the brokers who negotiate. But walang law that states this. We need a clear law for that.”

Mañalac also noted that should any foreign platforms seek to operate in the Philippines, they should still be associated with a duly-licensed Filipino real estate broker. He added that these platforms circumvent the law when “they remove the word brokers and they say they are just facilitating a transaction.”

Leuterio said that ABREP’s creation of a united front to address the shortcomings of RESA is not intended to abolish the law, but rather to improve it so that it serves the industry better.

“This movement is meant to make the industry better for all. We invite everyone who is affected to join us in the discussion so that we all have a voice,” said Leuterio. “Our intent is not the abolition of RESA, we believe strongly in its purpose. We simply do not agree that its current form is serving the industry as it should,”