Lascuna catches Zaragosa at helm with 69

TONY Lascuña flashed vintage form to fire a bogey-free 69 then watched Rupert Zaragosa fumble with a last-hole bogey to force a tie even as Joenard Rates rallied late to stalk the leaders in the third round of the ICTSI Riviera Invitational Challenge at the Couples course in Silang, Cavite, Thursday.

Lascuña rebounded from a par-game (72) in the second round with three birdies and preserved a solid 35-34 card by rescuing a couple of pars that put the multi-titled Davaoeño back in the hunt for the crown in pro golf’s resumption after a long layoff due to the global health crisis.

Zaragosa, who got past first round leader Rates with a 69 Wednesday, threatened to pull away with birdies in the first two holes and clung onto a one-stroke lead despite slowing down with a two-birdie, two-bogey in the next 14 holes. 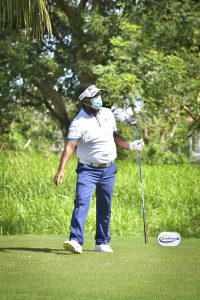 But he stumbled with a bogey on the 18th and finished with a 71, enabling the four-time OOM winner Lascuña to gain a share of the lead at 212 heading to the last 18 holes of the P2.5 million championship put up by ICTSI and organized by the Pilipinas Golf Tournaments, Inc.

Rates, who dropped off the leaderboard with a second round 73 after a 69, checked a roller-coaster round of three birdies against four bogeys with birdies on Nos. 16 and 17 as he saved a 71 and stayed just a stroke behind the joint leaders at 213.

That set up a three-cornered fight for the top P350,000 purse although Dutch Guido Van der Valk and young Ira Alido stayed in the title chase with 215s after matching par 72s and former OOM winners Jobim Carlos and Miguel Tabuena stood four strokes off with even par 144s after a 70 and 73, respectively.

The rest of the starting 43-player field lay too far behind to pose a threat although no lead is safe on a challenging course that rewards bold but accurate shots and punishes even the slightest of mistakes.

Fidel Concepcion failed to sustain a second round 68 and limped with a 75, tumbling to joint eighth with Rico Depilo, who also cracked when the going got tough, hobbling with a three-over card after back-to-back 71s. Both pooled 217s.

Angelo Que, the former three-time Asian Tour winner and a dominant force in the local circuit for years, finally broke par after a 73-74 but his 71 and a 218 kept him six shots adrift of Lascuña and Zaragosa.

Other 218s scorers were Gerald Rosales and Albin Engino, who carded 72 and 73, respecitively.

Lascuña and Zaragosa figured in a five-man playoff in the PGT Asia Pradera Verde last January won by absentee Clyde Mondilla with the former tipped to use his experience and poise against the former many-time national champion, who is raring to prove his worth after coming up short in his clear shot for a maiden victory the last time out.

Rates, meanwhile, is also upbeat of his chances for a follow-up to his PGT Asia win at Summit Point in 2018 while Alido hopes to make the most of his another crack at a breakthrough win and Van der Valk seeks to remain the lone player to win in this pandemic-hit season after bagging The Country Club Invitational last March.