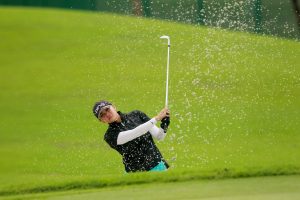 Princess Superal shrugged off rookie Abby Arevalo’s early threat stymied by the latter’s own undoing as she got back to the podium in the Ladies Philippine Golf Tour return in new normal with a five-shot victory in the ICTSI Riviera Invitational Challenge at the Couples course in Silang, Cavite, Thursday.

Bracing for a cruise after staying on top by five through 36 holes Wednesday, the reigning Order of Merit champion saw Arevalo pull within three with back-to-back opening hole birdies which the latter, however, squandered with a double-bogey mishap on No. 3.

That all but settled the outcome of the 54-hole championship, the first of two bubble tournaments put up by ICTSI to mark pro golf’s resumption after an eight-month hiatus due to pandemic, as Superal birdied No. 6 and matched Arevalo’s birdie on the ninth to go 6-up again at the turn.

The multi-titled Superal, whose victories included last year’s romp at John Hay where she also reigned as an amateur in the LPGT inaugurals in 2013, then switched off the attack mode at the back, settling for a one-birdie, one-bogey game for a 34-36. She wound up with a seven-under 209 worth P72,000, spiking her bid with a brilliant eagle-aided opening 67 that propelled her to a six-shot lead over Arevalo.

It was cruise control from there for the 2014 US Girls’ Junior champ as nobody from the compact field could mount any serious challenge with Arevalo ending up matching Superal’s final round output of 35-35 for a 214 for second, marking her maiden campaign with P52,000 in earnings.

Pauline del Rosario, who dominated her rookie season in 2017 with four victories on her way to clinching the OOM diadem, blew a two-under card at the front with three bogeys in the last nine holes, ending up with a 73 for third at 221 while Chanelle Avaricio, the other rookie in the fold, rammed in three straight birdies from No. 3 but dropped a stroke on the par-5 11th and finished with a 70 for fourth at 222.

Superal, who missed out on her campaign in the Japan Step-Up Tour due to travel restrictions and quarantine procedures, seeks to sweep the next LPGT event slated Dec. 8-11 at the adjacent Langer course. (PR)