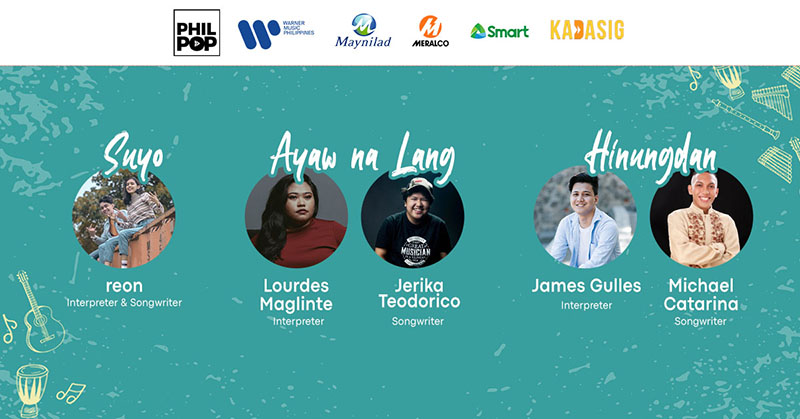 PHILPOP, the country’s premier songwriting competition, returns with an eclectic set of new releases from the finalists of the Visayas cluster.

Breaking cultural barriers, “Suyo” tells the story of quarreling lovers from the opposite sides of the country. Over the course of the intricately produced jam, composers Noah Alejandre and Reanne Borela exchange sweet banters to win each other back in Bisaya and Tagalog, respectively.

“This song breaks the norms of OPM songs having only one language and giving emphasis on couples who are from different parts of the country,” Alejandre explains the inspiration behinf the new tune. “Both of us never really experienced being in a relationship, yet we made the song as if we were in one and took inspiration from our imaginations. Reanne took inspiration from her friends who were in relationships and have witnessed how they would fight about the simplest things and get back together right after. They took this as an opportunity to create a playful song that resulted into the song.”

With its understated charm and infectious pop songwriting, “Suyo” stands out for putting a new spin on the classic love song template. It seamlessly blends the charm and tension points of two different languages, showcasing a pure kind of love that goes beyond cultural and geographical differences.

Weaving folk-pop instrumentation with striking vulnerability, “Hinungdan” brings back earnestness and subtlety at the forefront of the songwriting process, allowing words and melodies to wander into the open space and take off.
Cebu-based composer Michael Catarina cites British singer-songwriters Ed Sheeran, Passenger, and James Bay as major influences in writing “Hinungdan”—a song about “a person who is having a hard time telling his feelings for someone.”

Catarino relates to the universal appeal of the self-penned composition, sharing how he felt the same at some point in his life: “I can’t deny but I have personally experienced this as well. Way back then, when I wrote this song, I was just embracing the moment of being frustrated by writing the things that I couldn’t say.”

According to PhilPop finalist Jerika Teodorico, “Ayaw Na Lang” is a Bisaya phrase that translates to “never mind” in English.

“The lyrics are from the perspective of a lovelorn person slowly acknowledging and accepting the fact that although her love interest seems to return even a fourth of the feeling, a romance between them just won’t do,” the Cebuana composer and songwriter reflects. “It’s a very confusing feeling to deal with, and as a songwriter and a person who has a hard time processing my thoughts and emotions, I felt compelled to make a monument out of that half-joyous, half-torturous moment. It was also me trying to assure my love interest that it was fine, and there were no hard feelings after that night.”

From a musical standpoint, there’s nothing over-the-top about “Ayaw Na Lang” in terms of production and arrangement, but its charm lies on the gritty, throwback vibe that arranger and co-producer Anjelo Calinawan brought to the mix, making it sound like an ‘old-meets-new’ kind of jam. The overall product is something that Amy Winehouse or Duffy wouldn’t mind singing their hearts out, but in the entry’s case, it’s songstress Lourdes Maglinte filling in the shoes to interpret this smoky, jazz-pop original with both sass and soul.