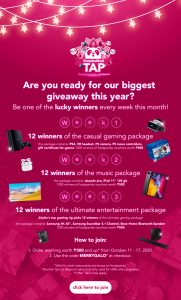 Food and essentials delivery service foodpanda has launched a promotional campaign to celebrate an early Christmas.

The “kumukutikuti-TAP: Isang Dosenang Pamaskong Hatid ng foodpanda” is part of the company’s way of celebrating the yuletide season.

The campaign, considered its biggest so far, is also its way of thanking its growing customer base for their continued patronage as it has allowed them to access their favorite dishes and essentials at the comfort of their homes and offices.

Every week starting this week until the end of the month, customers will get the chance to win prizes, like the hottest gaming and entertainment packages as well as foodpanda vouchers, that will truly put smiles on the faces of the winners.

The 12 winners on the second week will get a “Music Package” which includes an AirPod Pro and an iPad Pro 128 GB.

Another set of 12 winners will bring home the “Ultimate Entertainment Package” which includes a Samsung 4K 65” TV, a Samsung Soundbar 5.1 Channel, and a Bose Home Bluetooth Speaker.

The service is also giving away vouchers of P500 and P1,200 during the promo period.

To get the chance to win prizes, customers should order their favorite food and essentials through the foodpanda app with just a minimum order of 299 and use the voucher code MERRYGALO when they check out. Every use of the voucher code is equivalent to an entry.

In its announcement, foodpanda said customers must continue to its Facebook and Instagram pages for more campaigns and promotions.