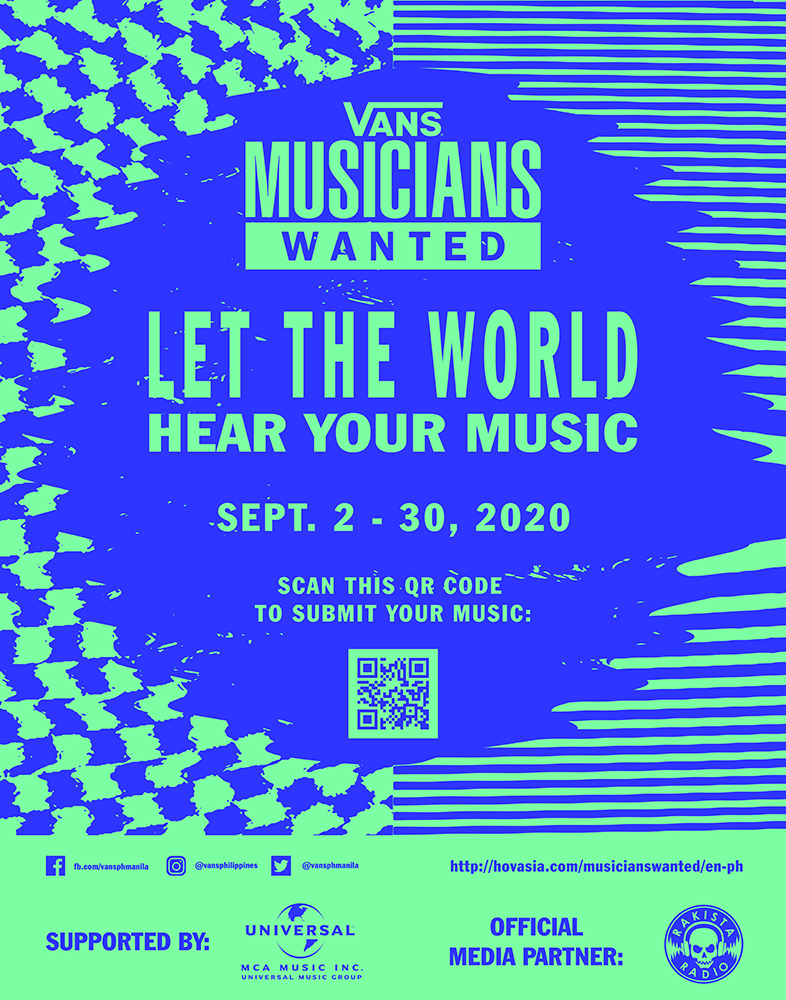 VANS APAC. (Sept. 2, 2020) – Vans, the original action sports brand and global advocate for creative expression announces the worldwide expansion of the brand’s celebrated music platform, Vans Musicians Wanted. Originally launched in Vans’ Asia-Pacific region in 2015, the Vans Musicians Wanted competition is a global music platform that provides undiscovered musicians a chance for their original music to be heard by a global audience. This year’s competition has evolved into a seamless digital experience, and will award one grand prize winner the opportunity to share the stage with Vans Ambassador and Grammy award winning artist Anderson .Paak.

Launching in partnership with the trailblazing talent from Vans’ final chapter of the ‘THIS IS OFF THE WALL’ brand campaign released today, Vans shares the compelling journey of two artists: Atlanta-based rapper, J.I.D and Chinese-born and American-raised artist, Bohan Phoenix, who express their personal identities through music. Inspired by their experiences of fusing cultural identity with raw musical prowess, Vans has partnered with J.I.D and Bohan Phoenix to serve as guest judges for the global competition. The stories of these two young artists within the hip hop industry serves as a catalyst for the next generation of musicians looking to come up from their bedrooms to main stage.

Vans’ ‘THIS IS OFF THE WALL’ campaign stories celebrate creative expression through the pursuit of artists making their own way forward in hip hop. The genre has become a distinct language of choice for young voices who continue to work to forge their own path by any means necessary.

Born and raised in East Atlanta, Destin Choice Route, better known by his stage name J.I.D, has carved out a unique space for himself through his raw talent and unwavering desire for greatness. While creativity was a constant throughout J.I.D’s life, he originally pursued professional sports, but through injuries and uncertainty, he embraced music. Driven by his magnanimous work ethic, J.I.D’s focus on writing and dense wordplay has helped to establish him as a leader in a new wave of hip hop that values craft over hype, defining a new sound that is unmatched. Hear J.I.D’s origin story and the path he has taken in order to hone his craft at Vans.com/JID.

Born in Hubei, China and moved to Massachusetts, Bohan Phoenix was introduced to hip hop when his mother used popular movies and television as a tool to teach him English. One movie in particular sparked a love for music and culture that would go on to define his life moving forward. This introduction to hip hop led Bohan down a path of discovery and personal exploration that brought him to create his own music. By embracing his upbringing and dual cultural identity, he began to make music that blended two languages and cultures together to create something uniquely personal, pushing hip hop in new places. Watch Bohan Phoenix’s journey to self-discovery and how his multicultural upbringing has come to influence his identity as an artist at Vans.com/BohanPhoenix.

To celebrate the partnership, Vans has teamed up with Bohan Phoenix to release his customized Vans shoes on Vans.com/Customs.

Joining J.I.D and Bohan Phoenix as special guest judges, European based singer-songwriter Nilüfer Yanya, and Grammy award-winning artist, Anderson .Paak will review the top-5 artists from each region. Top-5 artists from APAC will perform at the Vans Musicians Wanted Virtual Concert this December, they will also receive free album distribution through Spinnup, Universal Music Group’s distribution service for independent artists. One grand prize winner will be selected to receive Vans product, Fender Gear, Vans Spotify and Apple Music playlisting, music video produced by Universal Music Group and one year of free and unlimited global music distribution from Spinnup (APAC exclusive), and the opportunity to share the stage with Anderson .Paak as the opening act in 2021.